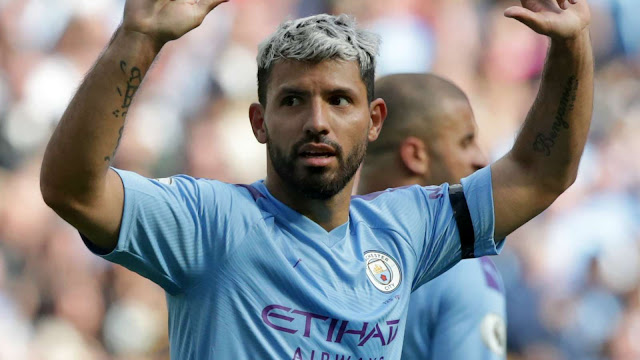 The Premier League Golden Boot is one of the most popular betting markets and this season is expected to be no different.


Mohamed Salah, Sadio Mane and Pierre-Emerick Aubameyang shared the crown last season with 22 goals each, the third time the award has been handed to three players in the same campaign.
The tussle for the individual prize in 2019-20 is set to be just as tight, with five of bet365’s top six favourites all previous winners.
Sergio Aguero is 7/2 (4.50) favourite to win the Golden Boot for the second time in his illustrious career after netting seven goals in the first five games of the season.
Despite boasting 164 Premier League goals prior to this season - the sixth-most of all time - Aguero appeared to have dropped behind Gabriel Jesus in the pecking order after the Brazilian started the first game of the season.
However, the Argentine has started all of City's games since then and could be in line for his sixth consecutive 20-goal season in the Premier League.
Harry Kane is 5/1 (6.0) favourite to win the Golden Boot for the third time in his career. One of the deadliest marksmen in the Premier League, the England captain has 128 goals in the competition.
The Spurs striker previously won the award in 2015-16 and 16-17 and began this term in fine style with two goals in Tottenham's opening match against Aston Villa before netting against Arsenal for the 10th time in as many appearances.
An injury-hit campaign last time out meant he could only muster 17 goals in the 28 games he played, which is still an impressive return that may make him a popular choice this season.

Salah can be backed at 11/2 (6.50), who has taken the Premier League by storm since joining Liverpool and is out to win his third Golden Boot in a row.
The Egyptian scored twice in the Reds' 3-1 win over Arsenal and finished off a superb passage of play against Newcastle to take his tally to four goals in five appearances.

Who are the underdogs to win the Premier League Golden Boot?

Aubameyang is available at 6/1 (7.0) to continue his fine goalscoring form since joining Arsenal by winning the Golden Boot again.
The Gabon international has picked up where he left off last season with five goals to his name, including one in the North London derby against Spurs, and his record may be enough for some punters to get onboard at an outside price.

Raheem Sterling is 9/1 (7.0) after scoring a hat-trick in Manchester City's opening match of the season, a 5-0 victory at West Ham.
The winger has netted five goals in all this season, although he has failed to score in his last two fixtures. Having netted 35 times across the previous two terms, Sterling will surely be out to break the coveted 20-goal mark this time around.
Mane had the best season of his career last time out with 22 strikes and is 9/1 (10.0) to replicate that success by winning the Golden Boot again this term.
The Liverpool forward had an excellent second half of the campaign, plundering 14 of his strikes in 2019, and has scored four so far this term including two against Newcastle.
bet365 offer 10/1 (11.0) that Tammy Abraham picks up the Golden Boot award after establishing himself as Chelsea's main striker this term with seven goals so far, including a hat-trick against Wolves.

Who are the outsiders to win the Premier League Golden Boot?

Teemu Pukki is second in the standings with six goals so far and is 25/1 (26.0) after an impressive hat-trick against Newcastle, with Norwich's survival hopes likely to be pegged on the Finn.
Initially thought to be Manchester United’s frontline striker this season, Marcus Rashford has been played out wide so far and is 33/1 (34.0) to become the first Red Devil since the departure of Sir Alex Ferguson to win the Golden Boot.
Jamie Vardy can be found at 40/1 (41.0) and may offer significant place value at the very least, given that the Leicester striker has accumulated 75 league goals in the last four seasons and has begun this term with three strikes.
Odds correct at the time of writing. Please gamble responsibly.
Sports