Who will be the Champions League top scorer in 2019-20? The favourites, outsiders, underdogs & latest odds 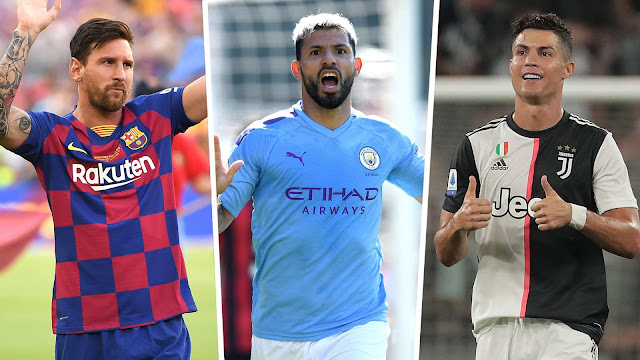 The Champions League group stage is under way and the fight to be top goalscorer in UEFA's top tournament is as competitive as ever.


Lionel Messi and Cristiano Ronaldo have dominated the award in the last decade, with the Barcelona man taking the award last season, and it is little surprise to see the pair amongst the favourites again.

Who are the favourites to be Champions League top scorer?

Messi is 4/1 (5.0) favourite with bet365 to be Champions League top scorer for the second season in a row.
The Barcelona forward netted 12 goals last term as his side reached the semi-finals of the competition, making it the sixth time he has been top scorer in the competition.
Messi has not won the accolade twice in a row since 2012, however, and will look to upstage eternal rival Ronaldo as Barca look for a sixth Champions League crown.
Ronaldo is 5/1 (6.0) to be Champions League top scorer for the eighth time in his career, having seen a six-year domination of the title ended last season when he could only score six times.
No other player has scored as many goals in the tournament as the Juventus forward, who boasts 126 strikes since his debut in 2003 and was an integral part of Real Madrid lifting the trophy four times in five years.
Juve open their campaign with a trip to Atletico Madrid and Ronaldo will have fond memories of the hat-trick he scored against them in last season’s last-16 victory over the Liga side.
Sergio Aguero is an 8/1 (9.0) shot to be Champions League top scorer for the first time as Manchester City look for their maiden European crown.
The Argentine has never scored more than six goals in a single continental campaign, which he achieved last year, and will likely have to reach double figures this time around if he is to win the top goalscorer award.

Who are the underdogs to be Champions League top scorer?

Mohamed Salah could prove to be a popular bet at 10/1 (11.0) after scoring five times for Liverpool as they lifted the Champions League for the sixth time in their history last season.
The campaign prior to that, when the Reds lost 3-1 to Real Madrid in the final, saw the Egyptian net 10 times as he and strike partners Roberto Firmino and Sadio Mane all hit double-figures.

Fellow Premier League star Raheem Sterling is available at 12/1 (13.0) to dramatically improve on his previous Champions League returns by topping the scoring charts this season.
The Manchester City forward netted just five goals in the tournament last term although he will certainly be looking to top that after plundering 25 goals in all competitions – his best season ever.
Kylian Mbappe is available at 14/1 (15.0) after a disappointing 2018-19 campaign saw him strike just four times in Europe as Paris Saint-Germain exited at the last-16 stage.
The French forward is available at the same price as Robert Lewandowski, who scored eight times in as many Champions League fixtures last season and could prove good value if Bayern Munich get past the last-16.

Who are the outsiders to be Champions League top scorer?

Harry Kane was on the losing side of last season’s final and is 20/1 (21.0) to erase at least some of that heartbreak by scoring the most goals this time around.
Also priced at 20/1 (21.0) with bet365 is Sadio Mane, who only scored four times in the competition last season but managed 10 in 2017-18, including the Reds’ goal in that final.
New Barcelona signing Antoine Griezmann is available at 25/1 (26.0) but may not have as many goalscoring opportunities as he did at Atletico Madrid due to the presence of Messi and Luis Suarez ( 33/1 ).
Neymar, too, is out at 25/1 (26.0) and although PSG have never got past the quarter-finals, the Brazilian has 11 goals in 13 Champions League appearances for the French side.
It is worth noting, however, that the forward has to serve a two-game ban, which is one of the main reasons for his longer price.
Odds correct at the time of writing. Please gamble responsibly.
Sports