Who Lie More Between VP Osinbajo And Lai Mohammed? By Erasmus Ikhide 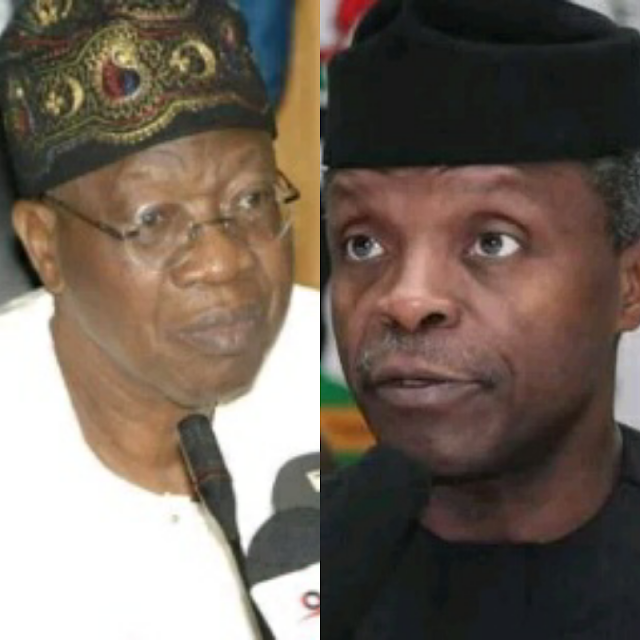 Vice President Yemi Osibanjo shouldn't have had anything to do with President Muhammadu Buhari's bankrupt and rapidly collapsing government, if he hasn't committed class suicide.


A former advocate of a restructured Nigeria and its egalitarian statehood has severally been caught in the bid vassilating between its desirability. Any surprise that Prof Osinbajo has all along been advancing the course of substituting actual restructuring for the APC's abridged version since he took office.
The joke in town before his current redundancy by the Aso Rock cabal has been "May Vice President Yemi Osibanjo not visit your household this weekend". That loosely translates to mean that once Fulani Herdsmen killed citizens in any part of the country, the VP is easily dispatched by the Presidency to pay pretentious condolence visit to the family of the victims. Such spontaneous condolence visit has become something that is ingrained in their subconscious minds mockingly, that Nigerians will continue to get slaughtered until they give up their ancestral lands for Fulani herders to graze on them.
Mr. Osinbajo, a once profiteering pastor and a second-in-command has presided over enormous poor people's tithes and offerings from Nigerian churchgoers in the Redeemed Christian Church of God (RCCG) without verifiable evidence that those who are enticed to forcibly give up their 10% earnings even when the church refused to pay 10% tax to government, ever got "un-merited favour mentality" they've be selling to gullible Christians.
What's clear is that the vice president himself has defamed the received truth about restructuring and sold the progressives and the nation collectively to the devil for electing to serve under Buhari's paranoid administration. He has since been battling, defending a glaringly indefensible government that has fulfilled all its electoral promises in abeyance.
It's hard to tell who lied the most between the VP and Lai Mohammed.
Even though his assigned role as the bad news bearer, obituary orchestra merchant and grave digger on behalf of the Presidency for the thousands of victims slaughtered daily by the beastly Fulani herdsmen militia groups across the country, it has been Osibanjo's assigned lot as the ultimate and unfortunate undertaker to shed one or two crocodile tears at the gravesides of the mighty — and — not-so mighty Nigerians who fall to the swords of the terrorist Fulani herdsmen.
On January 1, 2017, Fulani militia razed several villages for daring to prevent cattle to graze over their land and crops in Benue State. While conducting the mass burial, Prof Osinbajo literally danced elegantly on the blood and charred remains of Benue people slaughtered by the herders. That was the climatic episode that revealed the hollowness of VP Osinbajo's make-believe preachment for peace outside justice.
Those uprooted from their villages in Benue and elsewhere to IDP camps have had their ancestral home lands allocated to Fulani herdsmen for settlement, while the victims cry daily for food and rehabilitation because there are no more home to return to.
Prof Osinbajo himself was in Adamawa State a few weeks ago to kick off RUGA settlement scheme for which taxpayers' money has been set aside to build two- or three-bedroom flats for Fulani herdsmen who are doing their private business without paying tax to government.
The same Prof. Osinbajo whose presidential official duty is to conduct condolences and funerals for slain Nigerians told an audience in New York on Sunday June 23 that the killings in Nigeria was exaggerated.
"With respect to general kidnapping which we have seen in parts of the country, again, this is not entirely new. In fact, some of the kidnapping stories you read or listen to are simply not true anywhere, some are fuelled by politics.
“There are cases of kidnapping, no question at all about that, but some of the more dramatic stories that you hear are simply not true. Every report of kidnapping we receive, we try to verify, and at the end of the day you find out that people just tell all sorts of stories,” he said.
The position of the Yoruba socio-cultural organisation, Afenifere, that Osinbajo should seek forgiveness from God for lying about the spate of kidnapping and killings in the country and resign as the vice president of Nigeria is more valid now before he gets the boot.
It serves VP Osinbajo right that he's facing internal dissidents within the presidency for legion of charges. They have been calling for his exit in an irredentist government that prioritises falsehood — should I say — a northernised government that celebrates antiquity, poverty, social strife and bloodbath! Power blindness led Prof Osinbajo to tell all the hellish lies.
He should be stewed in his own juice.
ikhideerasmus@gmail.com
Follow me on Twitter @ikhide_erasmus1
Opinion