'We couldn't stay home and do nothing. Our country is sliding towards a fascist state' 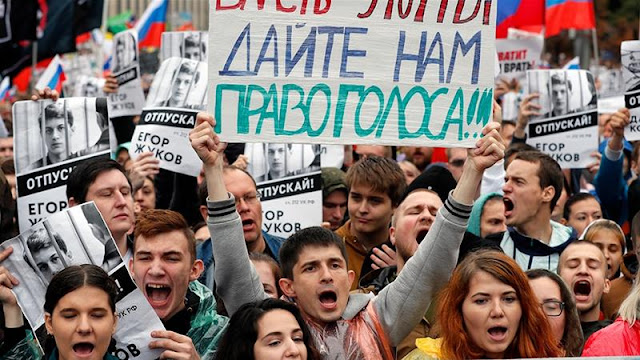 Moscow, Russia - In a few days, on September 8, Russians will vote in municipal and regional parliamentary elections.

In Moscow, the lead-up to elect the 45 members of the city "Duma", or parliament, has been marked by an unexpected succession of large rallies for free and fair polls, organised by the opposition and mostly met with a crackdown.
Discontent rose in mid-June when Moscow's electoral committee denied no less than 57 opposition and independent candidates - supported by thousands of Muscovites - a spot on the ballot for the city legislature.
Some well-known opposition figures, among more than 200 total candidates to the five-year tenure, were barred from running.
Observers claim the committee's motives are dubious at best.
This past weekend, in the sixth protest of the summer, about 2,000 people rallied in the Russian capital. They demonstrated against alleged political repression, with most young liberal opposition leaders later jailed with 10 to 30-day sentences for calling the initial protests.
Moscow authorities and the Kremlin still expect this window of turmoil to close and be forgotten about quickly once the vote ends.

The real takeout from these events is not the harsh response by police, but the people's response, this new civic response ... the trend is definitely upwards.

EKATERINA SCHULMANN, PROFESSOR AT THE SCHOOL OF PUBLIC POLICY OF THE RUSSIAN PRESIDENTIAL ACADEMY

But while Saturday's demonstration drew a slimmer crowd, the opposition showed resilience and a tough security response has failed to dampen the movement.
Public dissatisfaction with Russian power, recently more visible in other regions over local or environmental issues, "came to Moscow, a city that is usually well-fed, a city of state employees," said political scientist Ekaterina Schulmann, a professor at the School of Public Policy of the Russian Presidential Academy.
"Of course, the ban has angered them," she said, describing a sense of disenfranchisement among the voters.
"We've seen this kind of grassroots organisation pop up, locals helping each other about protesting, gathering.
"When people get in a 'protest mood', they usually take part massively."

The Duma yields little real power - but does greenlight the city's budget - and city parliament polls usually pass without much public interest.
Sam Greene, director of the Russia Institute at King's College, London, said the hardline response has raised awareness on the ballot and ramped up the protesters' determination.
More than 2,000 people have been arrested at the demonstrations, with some activists facing several years in jail for rioting charges.
"The harsh police response has galvanised the activists even more and transformed regular voters into protesters," said Greene. 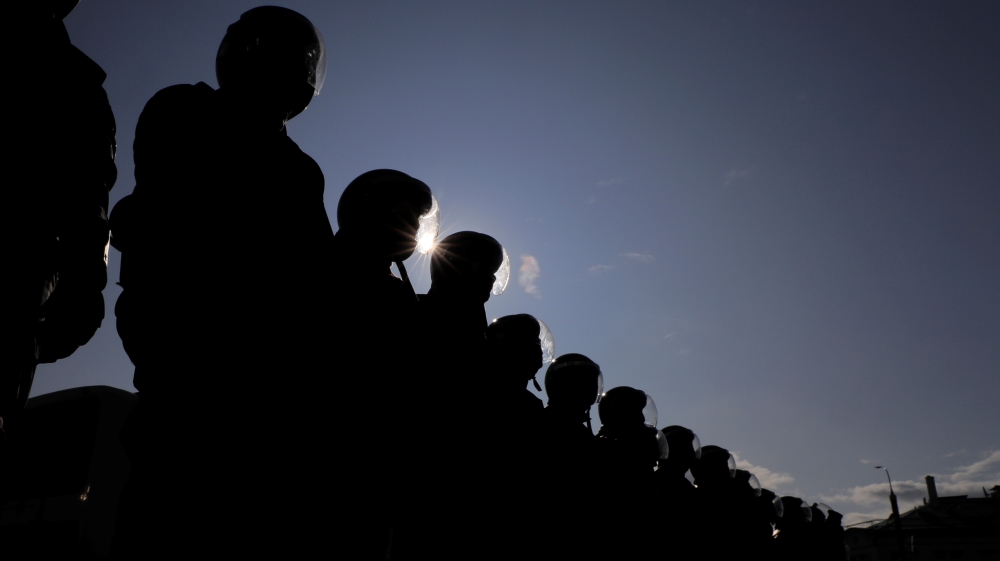 Law enforcement officers block a street during a rally calling for opposition candidates to be registered for elections to Moscow City Duma, the capital's regional parliament, in Moscow, Russia August 3, 2019 [Tatyana Makeyeva/Reuters]
On August 10, 50,000 people attended a huge sanctioned rally on Sakharov Avenue.
Protesters Ilya and Svetlana, a mechanic and an accountant, said they had travelled from distant Moscow districts to participate.
"We couldn't stay home and do nothing," Ilya told Al Jazeera. "Our country is sliding towards a fascist state, and we cannot accept that."
Marya, a pensioner at the demonstration, said: "The most difficult thing is we can't choose anything, nothing depends on us."
Yegor, a law student also at the event, told Al Jazeera: "When people realise things can change if we come out, then maybe things will really start to change."
In a strategy backed by prominent opposition figure Alexey Navalny, protest leaders are now trying to get as many people as possible to vote on Sunday against "state-supported" candidates.
The opposition considers these candidates as fake independents; they are running without the United Russia label of the ruling party, support for which is plummeting.

There have been dozens of people needing medical assistance, and more than 1,400 arrests on July 27, a shocking number.

In terms of raising awareness, the protesters can claim a PR victory over Moscow officials.
They have shattered the image of Moscow Mayor Sergey Sobianin, who was until recently a popular character, even among the capital's liberals and elite for transforming and "Europeanising" the city.
Among some sections of Russian society, the police response was viewed as brutal and disproportionate, especially given the demonstrators' mostly peaceful demeanour.
Images of riot police and national guards breaking a protester's leg, twisting people's hands and punching a woman in the stomach have been shared widely on social media.
Even more conservative figures, such as Sergey Chemezov, President Vladimir Putin's longtime ally and Rostec CEO, have timidly voiced concern over the authorities' rough handling of the rallies.
"There have been dozens of people needing medical assistance, and more than 1,400arrests on July 27, a shocking number," said Tanya Lokshina, deputy director for Europe and Central Asia at Human Rights Watch (HRW).
"We've counted at least 10 cases opened after the protests and five for 'violence against authorities'. One demonstrator has even been charged for 'mass rioting', but his sole crime was to take off an officer's helmet."
She added that young people, who have only known Putin as their leader, "want to finally have a say in their country's future".
Protest leader Ilya Yashin, a well-known opposition candidate, has become a symbol of the movement.
He was jailed five times in a row, each time rearrested as soon as he was freed for provoking unrest.
"And yet, without the leaders who were all in the prison, the movement kept going, which is interesting," said Greene.
Russia last witnessed protests on a similar scale about eight years ago, when tens of thousands took to the streets in the winter of 2011 and 2012, to rally against corruption in the 2011 legislative elections and against the Russian head of state.
"Bear in mind that the legislation changed a lot since those big anti-Putin protests, it has become tougher on demonstrations," said Schulmann. "The system is showing its weakness and thin skin, and can only rely on force.
"The electoral system here is based on public support, but the base of voters for the power in place is melting. These voters used to vote for the status quo, but this reality is eroding."
The demonstrations have come at a critical time, as the trust in Putin, according to some polls, is in decline.
"Traditional politics weren't seen as something useful by people, because it wouldn't change their everyday lives and welfare," explained Greene. "But it may be starting to shift. There is a sense of fatigue with the current leadership, and a sense of growing economic malaise."
State media has tried to downplay the protests, while officials have blamed "foreign meddling".

Whether the opposition can maintain the current momentum, and use it for substantial change, remains to be seen.
"I don't think these protests will bring significant political changes in the near future, but they have an impact," said Greene. "They refresh people's memory on the availability of protesting, and they increase the level of solidarity, far from the myth that Russians are passive and wary, not wanting to mobilise together."
The authorities are not giving up either.
A dozen protesters still face serious charges as leaders of the movement remain in jail.
In what HRW's Lokshina called a "new low", renowned activist and journalist Ilya Azar was this week arrested in the middle of the night, forcing him to leave his toddler unattended at home.
But even in this context, Ekaterina Schulmann said there was reason for the opposition to be hopeful.
"What is new, in fact the real takeout from these events, is not the harsh response by police," she said, "but the people's response, this new civic response. Something is emerging again. We look at trends, and the trend is definitely upwards."
Politics