US Open 2019: Rafael Nadal to face Daniil Medvedev in final 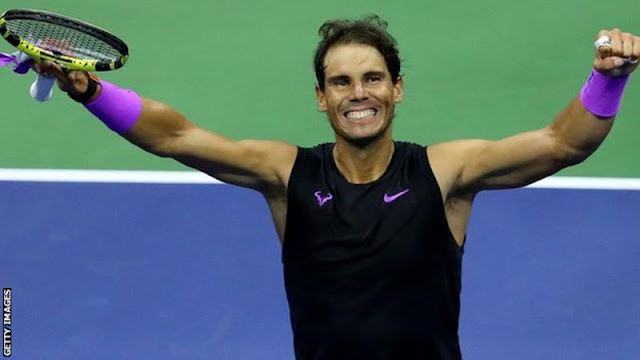 
Berrettini, 23, lost momentum after missing his chance but still showed why he is rated highly.
Nadal, going for a fourth title in New York, plays Russia's Daniil Medvedev in Sunday's final.
The fifth seed, 23, edged the crucial points against Bulgaria's Grigor Dimitrov to win 7-6 (7-5) 6-4 6-3 earlier on Arthur Ashe Stadium.

Nadal proves again he is the 'greatest fighter'

Nadal is already known as the 'King of Clay' after a record 12 victories at Roland Garros, but is setting his sights on overhauling Roger Federer in the race to be considered as the greatest of all time across all surfaces - at least by using the clearest, objective indicator of Grand Slam titles.
Since 38-year-old Federer's quarter-final exit to Dimitrov at Flushing Meadows, which swiftly followed Novak Djokovic's retirement against Stan Wawrinka because of injury, Nadal has been the hot favourite to earn his 19th major win.
If Nadal beats Medvedev, like he did in the recent Rogers Cup final in Montreal, he will move within one of Federer's tally for the first time.
The Spaniard has only dropped one set on his way to final and, after using all of his survival instincts to stop Berrettini doubling that tally, produced another quality display which suggests Medvedev will find it difficult to overcome him.
Nadal, described by Berrettini before the match as the "greatest fighter ever in the sport", dominated his service games throughout the match, not facing a single break point and dropping just 13 receiving points.
"The first set was a little bit frustrating because I had a lot of free points and you don't want to be in the tie-break against a player like him," said Nadal, who failed to take any of six break points in the opening set.
"I was a little bit lucky in the tie-break but I survived and then finally I had the break and after that the match completely changed. I played with more calm and was more aggressive."

Berrettini was the first Italian man to reach a US Open semi-final since 1977 and, in a city famed for its Italian heritage and population, unsurprisingly had a raucous backing on Ashe.
But the 24th seed - along with many inside the near 24,000 arena - was left rueing his inability to come out on top in a marathon opening set which he should have closed out.
Although his huge serve came under pressure, Berrettini impressed with ferocious forehands and his ability to mix things up, but was let down by his decision-making when it mattered most.
Helped by a Nadal double fault in the first point of the tie-break, Berrettini moved into a 4-0 lead with a brutal backhand winner across the court and teed up two set points at 6-4 with a neat volley.
Serving on the next point, he became tight on his delivery and could not pick up a clean backhand when he moved forward to the net.
A poor drop shot on his second set point barely reached the net, leaving Berrettini - and the noisy American-Italian fans - deflated as the ever-indestructible Nadal fought back to take the opener in one hour and 13 minutes.
Another weak effort from the baseline also proved his undoing in the second set, bringing up two more break points in the seventh game and - unlike the first set - Nadal converted clinically.
From that point, if not from the end of the first set, the outcome was inevitable.
Experience may have proved the difference on Berrettini's first Grand Slam semi-final but the potential of the powerful Italian, who has won ATP titles on clay and grass this year as well as performing well here on the hard courts, was clearly evident.

Medvedev was hotly tipped to be the man from outside the 'Big Three' of Nadal, Serb top seed Djokovic and Federer to challenge for the final Grand Slam of the season, following an impressive build-up on the North American hard courts.
After losing in the Washington and Montreal finals to Nick Kyrgios and Nadal respectively, Medvedev went one better in Cincinnati and has continued that form to become only the third man to reach all four finals in the same season during the Open era.
Despite his success, some of his antics over the past two weeks have not endeared him to the New York crowd, goading them with his provocative post-match celebrations and interviews.
That meant 28-year-old Dimitrov, a former world number three whose ranking has fallen to 78 after a shoulder injury led to a severe slump in form, received the bulk of the backing on Ashe.
But that did not faze the Russian, whose mental strength shone through once again as he took his third match point to win in two hours and 38 minutes.
"I have to tell you it sounds not bad," Medvedev said when asked what it felt like to be a Grand Slam finalist.
In contrast to his previous exuberant celebrations, Medvedev remained straight-faced and gave just a gentle nod to the crowd when he won and became the first Russian man in a Grand Slam final since Marat Safin in 2005.
Medvedev has suffered cramps and a quad injury, as well as having his run-ins with the American fans, in an eventful tournament which he described as "crazy".
But this was almost as straightforward as it had been for Medvedev.
Dimitrov, who beat Federer in an epic late-night quarter-final on Tuesday, won more points in the first set but paid the price for not being able to take a set point at 6-5 and then crashing a forehand into the net which swung the momentum of the first-set tie-break to the Russian.
Medvedev began to breathe heavily after some lengthy rallies in the second set, particularly following a tournament high 39-shot exchange in a pivotal ninth game which the Russian survived after 11 minutes to hold.
That enabled him to pinch Dimitrov's serve in the following game for a two-set lead and then break twice in a final set which saw Dimitrov's belief disappear.
"I felt he was much closer to the first set, but I won and that changed the momentum of the match," said Medvedev, who has now won 20 of his past 22 matches.

BBC tennis correspondent Russell Fuller at Flushing Meadows
Daniil Medvedev is the youngest male Grand Slam finalist for nine years. On Sunday, he will compete in his seventh final of the year, and his fourth in a row.
Two and a half years ago, he says, he decided to dedicate his life to tennis comprehensively, and now he is reaping the rewards.
He has a big serve, and gets an inordinate number of balls back in court as he athletically covers the court with giant strides.
He has won 20 of the 22 matches he has played since Wimbledon. So he has the confidence to beat Nadal, but does he have the ability and the energy to see him off over five sets?
It is a huge ask. Nadal has won only one Grand Slam away from Roland Garros in the past six years, but would surely have won more without so many cruel injuries.
He has been in blistering form throughout the two weeks. A win on Sunday will leave him just one Grand Slam title behind Roger Federer.
Sports