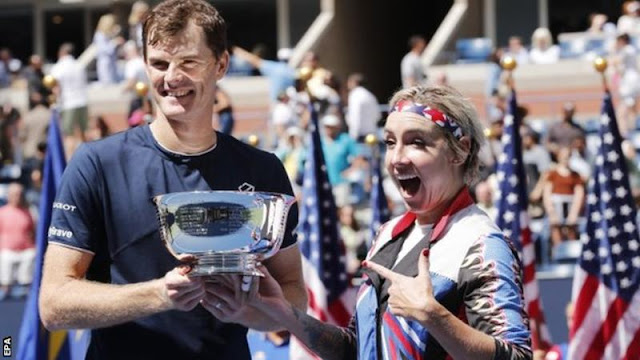 The pair defended their title with a 6-2 6-3 win over top seeds Chan Hao-ching and Michael Venus.


Scot Murray, 33, also made history by becoming the first man in the Open era to win three successive mixed titles at Flushing Meadows.
It is his seventh Grand Slam victory.
"We played amazing, the whole two weeks," Murray said at the trophy presentation. "We've had so much fun on the court. I'm really, really, really happy to win again."
Murray also won the mixed doubles in New York alongside Swiss great Martina Hingis in 2017, a year after claiming the men's title with Brazilian partner Bruno Soares.
Murray and Mattek-Sands, backed by a buoyant home crowd on Arthur Ashe Stadium, broke twice in a dominant first set, but in a tighter second set the teams exchanged four successive breaks of serve.
The British-American pair broke again for a 4-3 lead and converted their first match point when Mattek-Sands whacked a brilliant backhand down the line.
The 34-year-old American, who has won nine Grand Slam doubles title, celebrated by leaping on Murray before the pair took the acclaim of a jubilant crowd.
"Jamie, you were on fire these whole two weeks," Mattek-Sands said.
Sports