Third US 2020 Democratic debate: What did the candidates say? 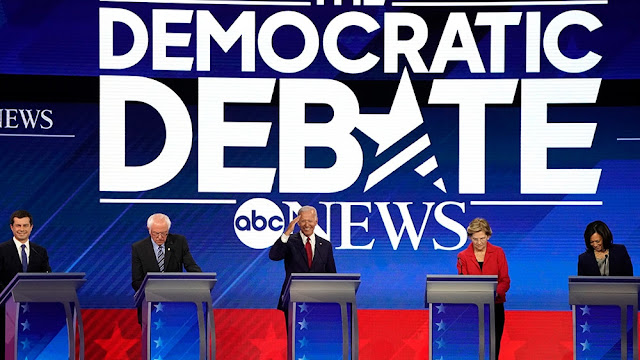 Democratic candidates went head-to-head on Thursday night in the United States in the first debate of this election season that hosted just 10 candidates, including all the top-performing 2020 hopefuls on one stage.

The night started out with some of the most heated exchanges of the debate as each 2020 hopeful contender attempted to show voters why his or her healthcare proposal was best.
Democratic presidential frontrunner Biden clashed with progressive challengers Warren and Sanders on healthcare, defending Obamacare (also known as the Affordable Care Act) and accusing them of not being honest about the cost of their plans.

"I know that the senator says she's for Bernie. Well, I'm for Barack. I think Obamacare worked," Biden said. "This is about candour, honesty, big ideas."Biden, who served as vice president for eight years under former President Barack Obama, said he would build on Obama's landmark healthcare law and accused Warren and Sanders of wanting to tear it down with their support for Medicare-for-all, a government-run healthcare plan that would eliminate private insurance.
Warren praised Obama's healthcare efforts, but said, "now the question is how best can we improve on it". She said that under Medicare-for-all, those at the top would pay more but the middle class would pay less. 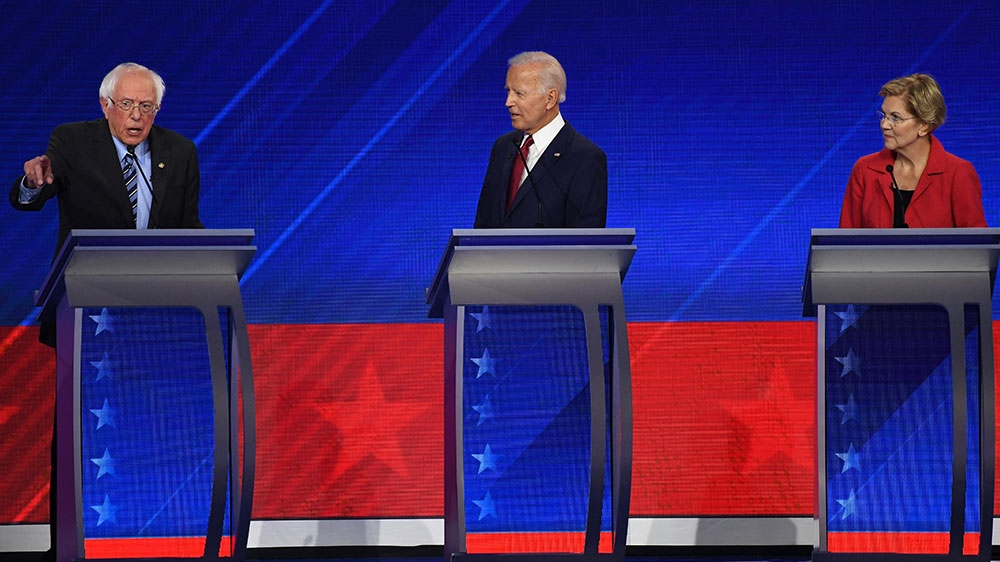 Senator Bernie Sanders speaks as former Vice President Joe Biden and Senator Elizabeth Warren listen during the 2020 Democratic US presidential debate in Houston, Texas [Mike Blake/Reuters]
Sanders, who sponsored the Medicare-for-all plan in the US Senate, said the plan based on the existing government-run Medicare programme for Americans 65 years and older was the most cost-effective approach. Some analysts have estimated his plan would cost $32 trillion over 10 years.
Sanders's plan to create a free, universal healthcare system has become a litmus test issue for liberal candidates.

Thursday's debate was the first since a series of mass shootings last month, including one in El Paso, Texas, in which 22 people were killed.
Since that shooting and others, O'Rourke, who is from El Paso, has been one of the most vocal candidates about it.
On Thursday night, O'Rourke said: "Hell, yes" when asked if he would institute mandatory buybacks for some machine guns if elected president. 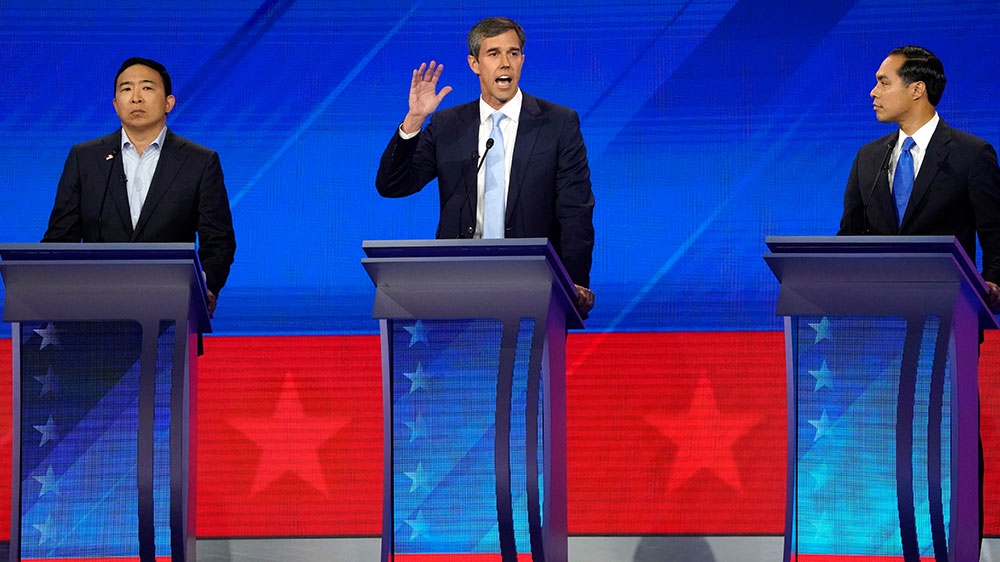 Former Representative Beto O'Rourke speaks as entrepreneur Andrew Yang (left) and former Housing Secretary Julian Castro (right  listen during the 2020 Democratic US presidential debate in Houston, Texas [Mike Blake/Reuters]
While O'Rourke supports mandatory gun buybacks, other candidates believe such a programme should be voluntary.
Biden argued that it was unconstitutional to take guns away from people.
Warren said that in order to pass meaningful gun legislation, the Senate must roll back the filibuster.

When the debate moved to immigration, several candidates said they would loosen restrictions put into place under the Trump administration.
Warren said that she would expand pathways to citizenship, blaming current problems on the US's withdrawal of aid to Central America. She said: "A crisis that Donald Trump has created and hopes to profit from politically".

Asked if Trump's supporters were racist, given the president's references to Mexican immigrants as rapists and criminals, Buttigieg said, "Anyone who supports this is supporting racism."Yang noted his status as the son of immigrants and called immigration "positive for our economic and social dynamism" and pledged to return immigration levels to those of the Obama administration.
Meanwhile, Biden dismissed questions about the Obama administration's record of deportations by touting the former Democratic president's effort to open doors to immigrants.
Castro accused Biden of standing by Obama when it suited him but sidestepping the administration's blemishes.

On trade, specifically Trump's trade war with China, Buttigieg said Trump "clearly has no strategy".
The candidates were asked during Thursday's debate about the tariffs Trump has imposed on China. Beijing has retaliated with tariffs that have hit US farmers and some other industries hard.
Klobuchar also was critical of Trump, saying he was treating farmers and workers "like poker chips in one of his bankrupt casinos".
The candidates' comments come as the US and China prepare to relaunch trade talks next month.
The countries have been trading conciliatory gestures, raising hopes they can de-escalate a standoff over trade that has shaken financial markets and cast gloom over the global economy. 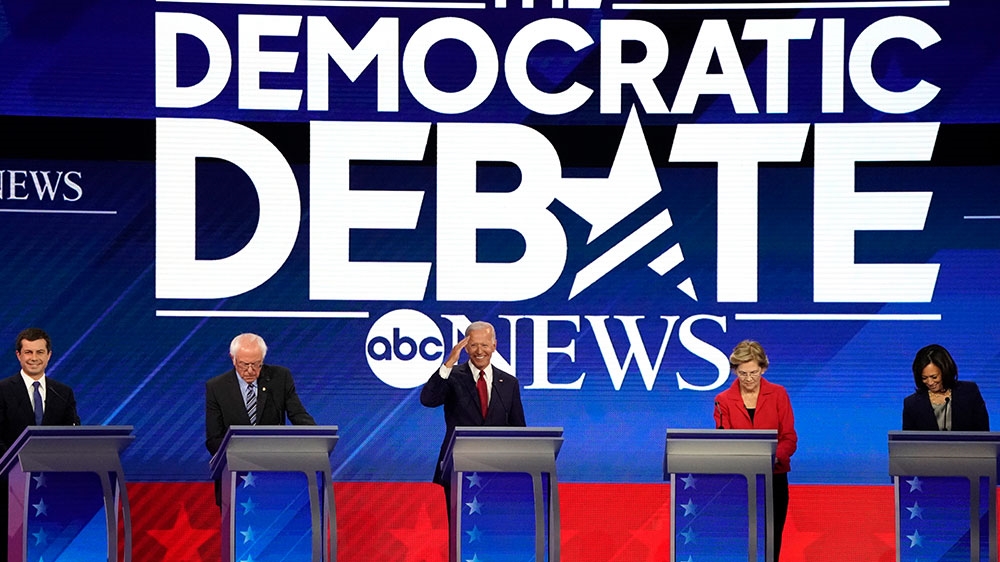 Former Vice President Joe Biden salutes as he stands with South Bend, Indiana, Mayor Pete Buttigieg, Senator Bernie Sanders, Senator Elizabeth Warren and Senator Kamala Harris as they participate in the 2020 Democratic US presidential debate [Mike Blake/Reuters]
Warren said that she would repair the country's trade relationships by leveraging desired access to US markets.
Saying US trade policy has "been broken for decades", Warren said that the heft of the American market should be used in negotiating with other countries in ways that are fair to workers, farms and small businesses.

During Thursday's debate, all the candidates agreed that more needed to be done to address the country's education system.
Yang said he supported a mix of options, including charter schools, in trying to fix the nation's education system.
Several candidates, including Buttigieg, Harris, Sanders and Warren, advocated for raising teacher salaries - something Cory Booker noted that "we actually did it" as mayor of Newark, New Jersey.
Warren and Sanders promoted student debt cancellation plans.
Harris touted her proposal to put $2bn towards the institutions' teacher training programmes, drawing applause from the audience at Texas Southern University, a Houston HBCU.

It was unclear how much if any at all, of the debate Trump watched live. For part of it, he was giving a speech in Baltimore, Maryland.
"I'm going to have to watch it as a rerun," Trump said before the debate.


The Democratic National Committee (DNC) implemented stricter guidelines for the September debate, requiring candidates to have polled at least two percent in four DNC-approved polls between June 28 and August 28 and obtained at least 130,000 unique donors, with at least 400 unique donors per state in at least 20 states.Who didn't make the stage?

Those requirements were significantly stricter than the first two debates in which candidates made the stage if they were polling at one percent in more than three separate DNC-approved polls or have at least 65,000 unique donors.
While the candidates on Thursday's stage met the stricter threshold, 10 did not.
Politics