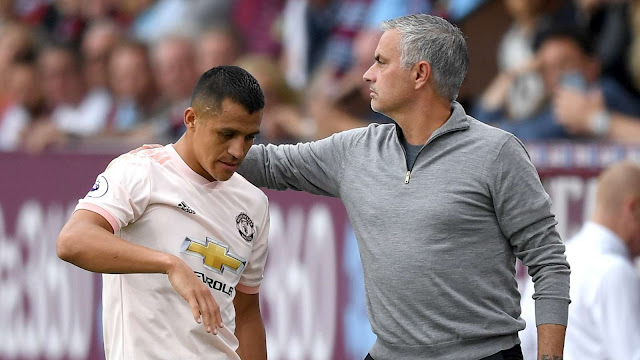 Jose Mourinho says he always had the impression that Alexis Sanchez was "a sad man" but hopes his former Manchester United player can regain his form at Inter.


Sanchez joined United from Arsenal in January 2018 while Mourinho was in charge, rejecting an offer from fierce rivals Manchester City in the process.
The Chile international was unable to secure a place in the Red Devils' starting XI, however, as the side failed to keep up with their dominant neighbours.
Sanchez, 30, made just 45 appearances for United before leaving to join Inter on loan and team up with another Old Trafford outcast, Romelu Lukaku.
While Mourinho admits his approach with Sanchez may not have been enough to help him thrive in Manchester, the former United boss says the attacker just did not seem happy at the club.
"Sanchez… I felt him [to be] not a happy man," he said to The Telegraph . "And I think in every job you have when you are not happy it is not so easy to perform at every level. And maybe I am wrong. Maybe it was me who was not capable to get into him and to get the best out of him.
"As a manager sometimes you have the capacity to get the best out of the players and other times you are not successful in that approach. But the reality is that I always felt [of Sanchez], ‘a sad man’. So probably in Italy he will recover this. I hope he can. I always wish well to every player.”
While Sanchez is hoping to find his form at a new club, Mourinho is still out of work since he was sacked by United last December.
The 56-year-old admits that he had the chance to sign a lucrative offer from Chinese club Guangzhou Evergrande, but he is looking for a different challenge as he plots his return to the game.

“It would be the record [salary] in the history of football managers by far," he said when asked about the offer from the Chinese Super League outfit. "[But the job was] not for me.
“For sure my next job will be a difficult one because I am very bad at choosing projects. I am either bad at choosing projects or the bad projects choose me. But it is always the same.
"When I go to Madrid, it is because Madrid are in trouble. When I go to United it is because United are in trouble.
"When I go to Chelsea the first time it is because they haven’t won the league in 50 years. When I go the second time it is because their top team disappeared and they want to be champions with a new team.
"When I go to Inter it is because they haven’t won the Champions League for 50 years.
“I have never had one of these clubs where it is: ‘Come on, the team is here ready’. But that is the nature of things. When the teams change coaches in the middle of the season it is for a reason. It is because of bad results.”
Sports