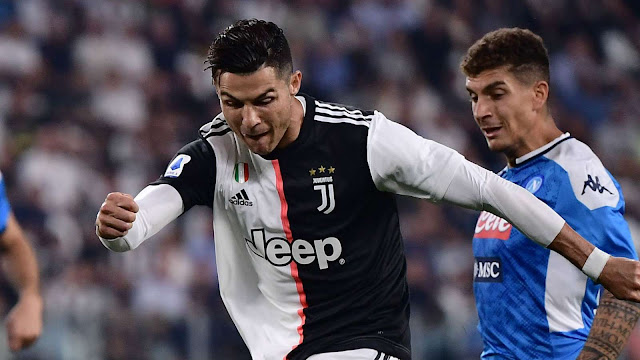 Massimiliano Allegri lauded the mentality of Cristiano Ronaldo, while the former Juventus head coach believes Inter can win the Scudetto.


Ronaldo should be in the twilight of his career, but the 34-year-old has shown no signs of slowing down after joining Juve from La Liga giants Real Madrid in 2018-19.
Allegri was in charge when Juve prised Ronaldo to Turin last season – the five-time Ballon d'Or winner scoring 21 Serie A goals and 28 in all competitions as the Italian champions claimed their eighth consecutive Scudetto.
Asked about Ronaldo – who netted four goals in Portugal's 5-1 rout of Lithuania to become the highest scoring player in European Championship qualifying history – Allegri hailed the veteran superstar.
"His strength is on a mental level," said Allegri. "He is 34 years old, he has won championships, European titles and golden balls but he continues to give himself important stimuli that make the difference.
"The technique is fundamental to stay at high levels for many years, but the difference is made by the head and the professionalism. If I prefer to coach Ronaldo or a young talent? Ronaldo, without a doubt."
Allegri worked with Ronaldo last season before the Italian coach and Juve parted ways following his fifth successive league title.
Juve reportedly turned to Maurizio Sarri in pursuit of European glory after their Champions League quarter-final exit – the Old Lady managing two runners-up medals under Allegri in 2015 and 2017.
Reflecting on his exit, Allegri said: "I have absolutely not regretted the choice made with Juventus, things must not be forced. After five years it was time to take a break, perhaps the president had understood it before me."
There is a touch of Juve at Inter this season, with former Bianconeri coach Antonio Conte joining chief executive Giuseppe Marotta in Milan.
Allegri won four straight Serie A title under Marotta's leadership before the 62-year-old moved to Inter in 2018 and the Nerazzurri are now one of the favourites to dethrone Juve.
"At Juve I won both with him [Marotta] and without him," Allegri added. "At Inter he built a strong team and with Conte he made a choice of weight on the bench. They can win the scudetto."
Sports