Rape as a weapon of war in Libya 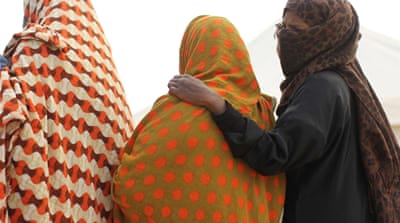 "If you use a bomb it goes through the body. It kills and it leaves a mark. Any weapon does. But rape is an invisible weapon. It's only uncovered if the victim speaks out," says Imad Erg, a Libyan human rights activist.


He, along with other activists in exile working from Tunisia, aims to uncover crimes in Libya as conflict continues to tear apart their home country.
Following the Arab Spring in 2011 and the toppling of long-time leader Muammar Gaddafi, Libya fell into chaos as rival factions struggled for control of the country and its oil reserves.
And in a war waged with guns and missiles, factions are also using a more silent weapon: systematic male and female rape.
Erg and his co-workers review online videos, speak to victims, and document their cases in the hope of prosecuting the offenders in the International Criminal Court.
One victim describes being handcuffed naked and left hanging off a door. Another describes dogs biting him, and watching prisoners being forced to rape each other. Other cases involve being sodomised with sticks and weapons.
"Now I have physical problems," says a victim, known as Ali, who was held in prison for six years. "At times it goes away."
Among those vulnerable are refugees and migrants from Africa and the Middle East passing through Libya on their way to Europe as well as the people of the town of Tawergha. They have been systematically discriminated against since the Battle of Misrata, an opposition city during the Libyan Revolution, for appearing (without conclusive proof) to have sided with government forces.
Khadija is from Tawergha and was raped by her own neighbour as well as other men who have conducted a shocking and indiscriminate vendetta against the primarily black residents of the town.
"These men tied me up and began to harass me. Five [men]. I couldn't get away. They raped my twice. They tore my clothes off, saying 'You Tawerghans will pay for what you did in Misrata'," says Khadija. "I said 'But we've been neighbours for 20 years' ... It was horrible. I can't talk about it. Everyone looked at me when I came out of the house. What did we ever do to them?"
Faced with painful memories and lasting injuries from their abuse, the men and women must also shoulder rape's taboos.
"You can offer millions to a victim to testify in a court," says another victim, Yassine. "He'll say, 'No way. I can't tell you what happened to me.' He'll say, 'I don't want to be known.' The victim is afraid of being exposed. His fear of being humiliated is constant. You become paranoid. You think everyone knows. That's the worst part."
Features