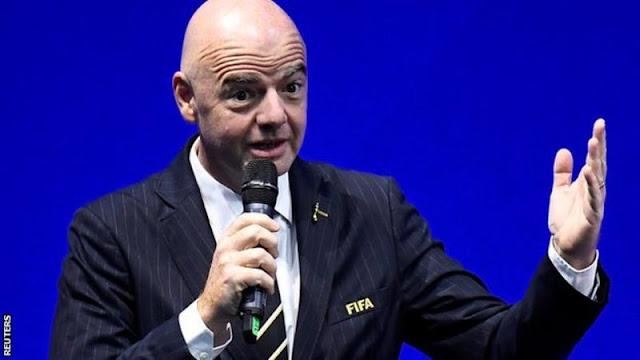 Sunday's game between Atalanta and Fiorentina was halted after reports of racist chanting, the latest in a line of similar incidents in Italy.


In England, fans who engage in racist behaviour face stadium bans.
"You can't have racism in society or in football," said Infantino. "In Italy, the situation hasn't improved."
Fiorentina's Brazilian wing-back Dalbert told the referee he had been the target of racist chanting and the Serie A match, which finished 2-2, was temporarily suspended.
An announcement was read out over the public address system and the game continued.
Last week, Cagliari were cleared of racist chanting towards Inter Milan striker Romelu Lukaku in a Serie A match.
That was the third time Cagliari have been investigated for alleged racist abuse in the past two years. Previous cases involved Moise Kean, the Italy forward now at Everton, and France midfielder Blaise Matuidi, Kean's then Juventus team-mate - but no action was taken on either occasion.
"Racism is combated with education, condemnation and discussion," added Infantino.
"You need to identify those responsible and throw them out of the stadiums. You need, as in England, the certainty of the penalty. You can't be afraid to condemn racists, we need to combat them until they stop."
Sports