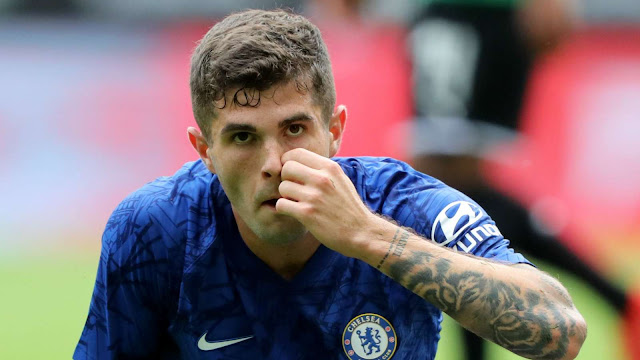 Christian Pulisic can thrive at Chelsea, says NBA legend Steve Nash, but the United States international is considered to be fortunate that a transfer ban means the Blues “can’t recruit over him”.


The 20-year-old playmaker is in the process of finding his feet at Stamford Bridge following a summer arrival from Borussia Dortmund.
He is held in high regard and expected to become a key figure for the Blues, but has experienced a few early teething problems as he adjusts to the demands of Premier League life.
Nash believes Pulisic will prove his worth, with the former Dallas Mavericks and Los Angeles Lakers star considering the youngster to be the USA’s finest export of all time.
He concedes that Chelsea’s inability to bring further fresh faces on board is working in the midfielder’s favour, but feels he boasts enough ability to flourish without any outside assistance.
The basketball great, who is a big Tottenham supporter, told the Bill Simmons podcast on Pulisic: “I love him. Talent-wise, yeah [he’s the best American player ever].
“It’s going to be very interesting, because I think he’s been very sharp so far at Chelsea.
“This isn’t a level above him, he can thrive at this level.
“He’s gifted, he’s quick, he’s got a quick mind, he’s versatile.
“At these clubs like Chelsea, where there’s money, he’s lucky because they’ve got a two-window transfer ban so they can’t recruit over him.
“These clubs, though, they’re going to have the opportunity to go out and buy a great player, so as much as anything it’s about him finding his spot and his role in this team and own it.
“He can be a great, great player, but if he doesn’t quite fit and nail down his position in the way that they play, he could flounder.
“He can be a 10, for sure, in the future. A lot of modern 10s start wide and then come in, [teams] don’t really play with that 10 in the hole that sits behind the striker.”
Pulisic has taken in five appearances for Chelsea to date, including three Premier League starts, and has recorded assists in English top-flight and UEFA Super Cup competition.
He will be hoping that a first competitive goal is not too far away, with Frank Lampard’s Blues set to return to domestic action after the international break with a trip to Wolves.
Sports