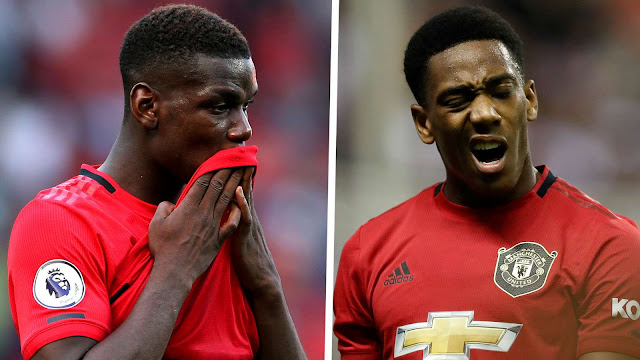 Manchester United will be without Paul Pogba and Anthony Martial for their home date with Leicester, Ole Gunnar Solskjaer has revealed.


The Red Devils have seen two French stars pick up untimely knocks .
Martial sat out United's 1-1 draw with Southampton two weeks ago after tweaking his thigh, while Pogba was unable to link up with his country during the international break after damaging his ankle.
That means neither will be able to figure against the Foxes when Premier League action resumes on Saturday.
Pogba and Martial are not the only ones handing Solskjaer a selection headache, though, with Jesse Lingard and Aaron Wan-Bissaka having pulled out of the latest England squad through injury .
United are hopeful that both will be come into contention for an outing at Old Trafford, but Luke Shaw has been nursing a hamstring complaint, Diogo Dalot a hip problem and Eric Bailly is out until December with a knee issue.
Red Devils boss Solskjaer told reporters at his pre-match press conference when asked for an update on his walking wounded: "Well the treatment room's been busy.
"And it still is. So we don't really know who's going to be available. There's maybe Aaron, maybe Jesse and I think maybe that's it from the ones that pulled out [from national squads], but I can't promise those two will be available either.
"Leicester is always a tough game, as a team, a club wanting to push into the top four, they've got good players, a good manager, a proven top manager, Brendan [Rodgers]'s teams always play with football and we've got to play well to get the three points.
"Pogba won't be fit, no. Unless he's had a miraculous recovery overnight from yesterday to today or tonight to tomorrow, he's not been ready to do 100 per cent training, no.
"We hope more can be ready for West Ham next week and Paul and Anthony are in that category. I think they'll be ready for then and can't say more than that really."
United will be desperate to bring their France international stars back into the fold.
The Red Devils have collected just five points from four games in 2019-20 and need to find inspiration from somewhere as they seek a spark to ignite their season.
Pogba and Martial have faced criticism at times for failing to deliver on expectations, but their ability remains without question and United are a better side when two proven performers are available.
Sports