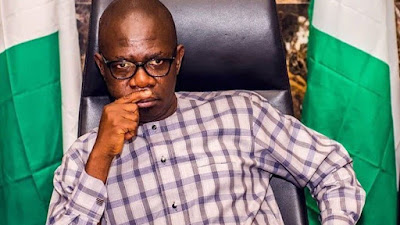 The Deputy Governor of Ondo State, Hon. Agboola Ajayi has cleared the air over the alleged hostility between him and his boss, Oluwarotimi Akeredolu.


According to Ajayi who spoke while celebrating his 51st birthday at the Government House, Akure, the Ondo State capital, unknown to people even within the governor’s cabinet, he has the best working relationship with Akeredolu.
The Deputy Governor who further stressed that the sponsored media attacks on his person lately is expected, noted that the state is heading towards a political period, particularly with the governorship election coming up next year.
He described the move as unnecessary, pointing out that what God has destined cannot be rewritten by any human.
While calling for the continued support of everyone for the Akeredolu-led administration, Ajayi emphasized that the governor is down to earth with his primary aim to ensure that Ondo State is at par with the comity of industrialized states in the country.
“All that is being written about me is expected. This is a political period where politicians get to hear all manner of cooked up stories.
“Prior to the last governorship election in the state where my boss (Akeredolu) emerged, I told him (Akeredolu) that I will support him in any way possible. Initially, I don’t have interest until he picked me as his deputy.
“I have served at the ward level, local government level, state level and at the federal level. So, there is nothing that I’m looking for that God has not done for me. I’m a fulfilled man.
“Let’s continue to pray for the governor. It is not easy to lead a state. Even within one’s family, it is not easy.
“Whenever I’m with him, his concern is always about Ondo State. All he wants is the greatness of Ondo State. Those that are very close to him, know him very well that he meant well for the state.
“A lot of people are saying a lot of things about me and the governor. There is never a time I have been to him that he has refused my requests. He has never reduced anything allocated to my office.
“All that is being said are fabrications, there’s no need to pay attention to such,” Ajayi said.
Politics