Not even a Juventus squad player or Ronaldo! Emre Can's disastrous decision to quit Liverpool 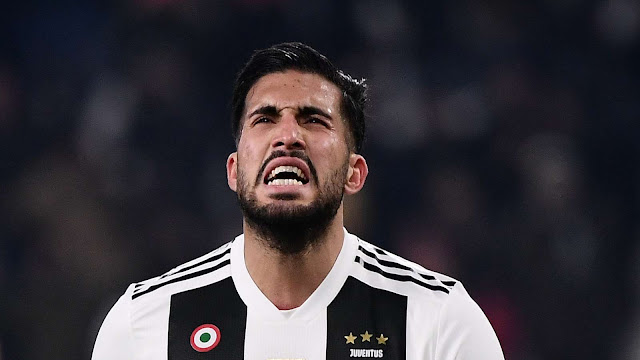 Right from the off, Emre Can made no attempt to hide the reasoning behind his decision to leave Liverpool for Juventus on a free transfer.


"I lost the Champions League Final against Cristiano Ronaldo last season," he told Sky Sport Italia ahead of the 2018-19 campaign.
"This season, I want to win it with him."
They didn't, though; it was Liverpool who claimed the trophy in June.
Even more gallingly for Can, he is now unlikely to ever lift the trophy alongside Ronaldo.
Indeed, he hasn't even been included in Juve's squad for this season's Champions League.
Of course, the German could be added to a revised panel for the knockout stage – provided Juve make it that far – in January.
However, by that stage, it is possible - if not, probable - that Can will be at another club.
He's certainly not happy at Juve anymore.

"It was very shocking for me," Can told reporters on Wednesday when asked about his Champions League omission the day before. "Last week I was told and promised something else.
"But, yesterday, I got a call from the coach, in which he told me in less than a minute and without explanation that I was not in the squad.
"I cannot explain it, nobody has given me a reason until now.
"Me and my agent had talks with other clubs [during the summer], PSG included. But after discussions with Juventus, we decided to stay with the club.
"A condition was to play in the Champions League, and that was what I was promised. Yesterday it was said - one day after the transfer period ended - that I'm not in.
"It just makes me angry and sad how I've been treated. I will take my decisions when I get back and talk to the club.
"I want, and I have to, play in the Champions League."
He'll play no part in this year's group stage, though.
If watching Liverpool win the Champions League a year after he'd left was bittersweet – Can was a popular member of the Reds dressing room and remains on good terms with several players – having to sit in the stands at the Allianz Stadium for Juve's games against Atletico Madrid, Bayer Leverkusen and Lokomotiv Moscow will be pure torture.
Can has never lacked either ambition or confidence. The coaching staff at Anfield were always impressed with his unwavering belief in himself.
The issue, though, as it always has been, is that Can is not quite as good as he thinks himself to be – which is why he finds himself in his current predicament.

Liverpool wanted him to stay at Anfield. He was viewed as a versatile, industrious and technically sound team player, so he was offered a new contract.
However, it was also thought that he held on to the ball too much and had a frustrating tendency to over-complicate matters in possession, with needlessly risky long-range passes.
In short, Can wasn't suited to the quick, simple style of play manager Jurgen Klopp was demanding of all his charges.
Is it any wonder, then, that Sarri has already deemed the midfielder surplus to requirements just a couple of months into his Turin tenure?

After leaving Merseyside in pursuit of "a new challenge", and a regular starting spot, Can showed some signs of promise during his first season at Juve.
Indeed, during a particularly productive spring period, in which he started five Serie A games in a row, he earned praise for his versatility and tenacity.
However, his campaign, much like the Old Lady's, petered out after the Champions League second-leg loss at home to Ajax.
Admittedly, it must be acknowledged that Can, along with Mario Mandzukic (who was also cut from the Champions League squad), is a victim of Juve's futile attempts to deal with what Sarri himself called an "embarrassing" situation.
Despite Fabio Paratici's best efforts to offload the likes of Paulo Dybala, Gonzalo Higuain, Mandzukic, Blaise Matuidi and Sami Khedira, Juventus reached the end of the transfer window with too big a squad.
A high-profile midfielder was always going to have to be chalked off the Champions League list, particularly after the arrivals of Adrien Rabiot and Aaron Ramsey.

However, Can's axing is hugely significant, and understandably a body blow for the player.
After all, Matuidi and Khedira are both 32 and in decline – yet Sarri has deemed both better options in midfield than the 25-year-old Can.
And not just in the Champions League. Both veterans started last Saturday's Serie A showdown with title rivals Napoli.
Can began on the bench and was only brought on with Juve 2-0 up. His introduction coincided with Juve losing total control of the middle of the park, with the champions ultimately only emerging victorious, 4-3, thanks to a ridiculous injury-time own goal from Napoli defender Kalidou Koulibaly.
The near-collapse wasn't all Can's fault, of course. Nor is his omission from Juve's Champions League squad.
Sporting director Paratici and his colleagues have utterly botched the Bianconeri's summer transfer window, leaving Sarri with the impossible task of trying to keep everyone happy within a bloated squad.
Can, by his own admission, is already upset with the situation – and understandably so. He could have guaranteed himself Champions League football by moving to PSG.
He would have been a handy utility man at the Parc des Princes, just as he was at Anfield.
Liverpool considered him a valuable squad player; unfortunately for Can, Juventus do not.
Sports