'No Planet B': Hundreds of thousands join global climate strike 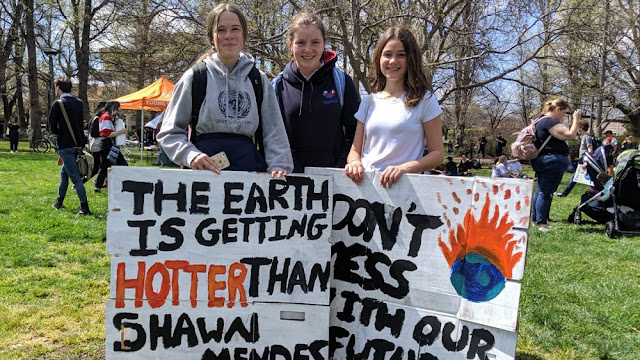 Hundreds of thousands of protesters, many of them students who skipped school, have gathered in cities across Asia, kicking off a day of worldwide protests calling for action against climate change ahead of a United Nations summit.


From the Pacific Islands to Australia and India, protesters took to the streets on Friday, demanding their governments take urgent steps to tackle the climate crisis and prevent an environmental catastrophe.
Rallies were also planned in Europe, Africa and the United States, where organizers say more than 800 events are expected on Friday.
Organisers estimated 300,000 people turned up for the "global climate strike" in Australia, the world's largest exporter of coal and liquid natural gas.
Protests were staged in 110 towns and cities across the country, with crowds calling on the government to commit to a target of net-zero carbon emissions by 2030.

Greta Thunberg ✔@GretaThunberg
Incredible pictures as Australia’s gathering for the #climatestrike
This is the huge crowd building up in Sydney.
Australia is setting the standard!
Its bedtime in New York...so please share as many pictures as you can as the strikes move across Asia to Europe and Africa! 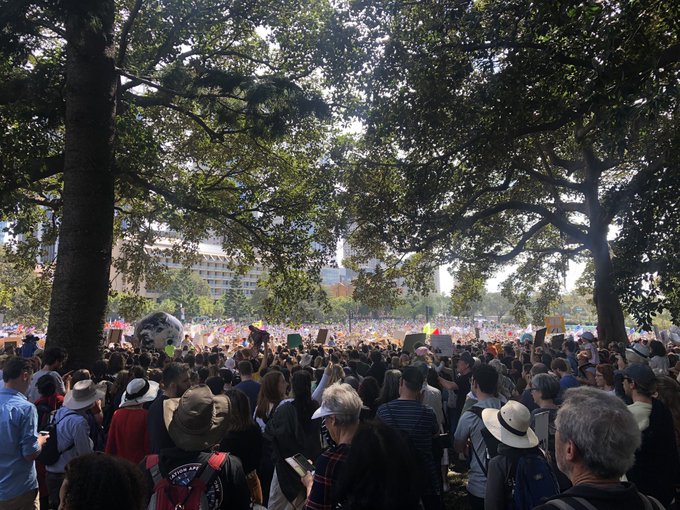 8,685 people are talking about this
Greta Thunberg, the 16-year-old Swede who inspired the climate strike, tweeted her support.
"Incredible pictures," she wrote from New York. "This is the huge crowd building up in Sydney. Australia is setting the standard!"
Protests are planned in some 150 countries on Friday and will culminate in New York when Thunberg, who has been nominated for a Nobel prize for her activism on climate change, leads the march in the city where the United Nations has its headquarters.
The UN Climate Action Summit brings together world leaders to discuss climate change mitigation strategies, including the move from fossil fuels to renewable energy sources.

In Canberra, the Australian capital, a 12-year-old primary school student told an estimated 10,000 people said she and her classmates had decided saving the planet was more important than classes.
"Politicians worry about us not going to school," said Alison. "But we're learning about the world, the danger we're in and what we can do about it. We know it's important to go to school and learn, but we know it is more important to save the planet for future generations to learn on."
Sixteen-year-old Elizabeth Whitbread attended the Canberra protest with a banner saying she was "hoping for a cooler death".
"I'm here because I want to live," she said. "We all have the right to the life we set out to have. I don't want to die young."
Acting Prime Minister Michael McCormack said students should be in school.
"These sorts of rallies should be held on a weekend where it doesn't actually disrupt business, it doesn't disrupt schools, it doesn't disrupt universities," McCormack told reporters in Melbourne.
"I think it is just a disruption," he added.
Australia's conservative government - while stopping short of outright climate change denial - has sought to frame the debate as a choice between jobs or abstract CO2 targets. 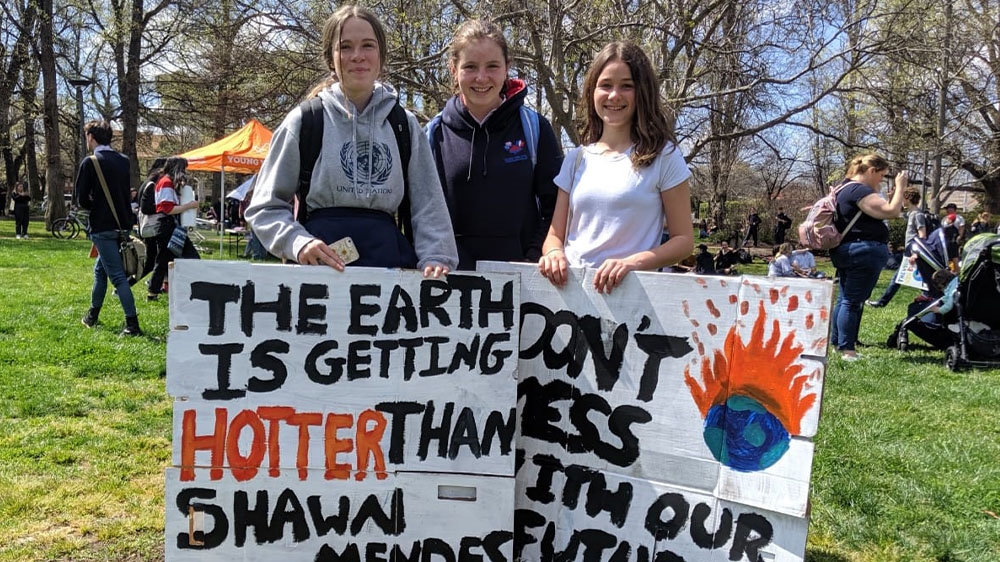 School students ignored politicians who told them to stay in their classrooms to join the global climate strike on Friday. These young women attended the protest in Canberra, Australia [Kate Walton/Al Jazeera] An estimated 10,000 people turned out in the Australian capital, Canberra, as a global day of climate protests got under way in the Asia Pacific region [Kate Walton/Al Jazeera]

As Friday's day of action got underway across the scattered Pacific communities, students holding placards in Kiribati chanted: "We are not sinking, we are fighting". Children in the Solomon Islands rallied on the shoreline wearing traditional grass skirts and carrying wooden shields.

This is how students are showing up for their strike in the Solomon Islands! 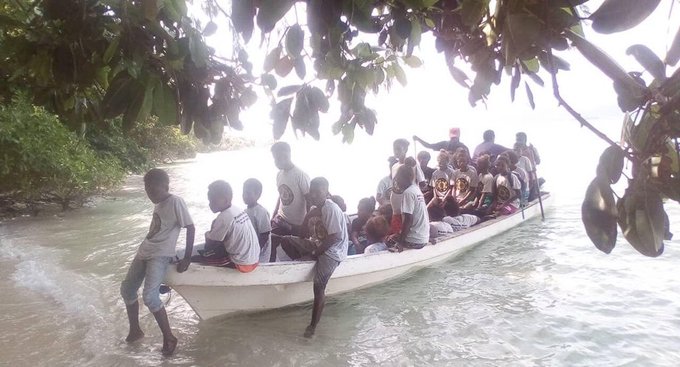 1,464 people are talking about this
Hours later in Thailand, more than 200 young people stormed the Environment Ministry in Bangkok and dropped to the ground feigning death.
"This is what will happen if we don't stop climate change now," said 21-year-old strike organiser Nanticha Ocharoenchai.
In Jakarta, the capital of Indonesia, students called for action against wildfires on the islands of Borneo and Sumatra, which have caused health problems for people across the region.
"The youth here are saying they want the government to deal with this issue more urgently and take more action," said Al Jazeera's Raheela Mahomed, reporting from the protest site. 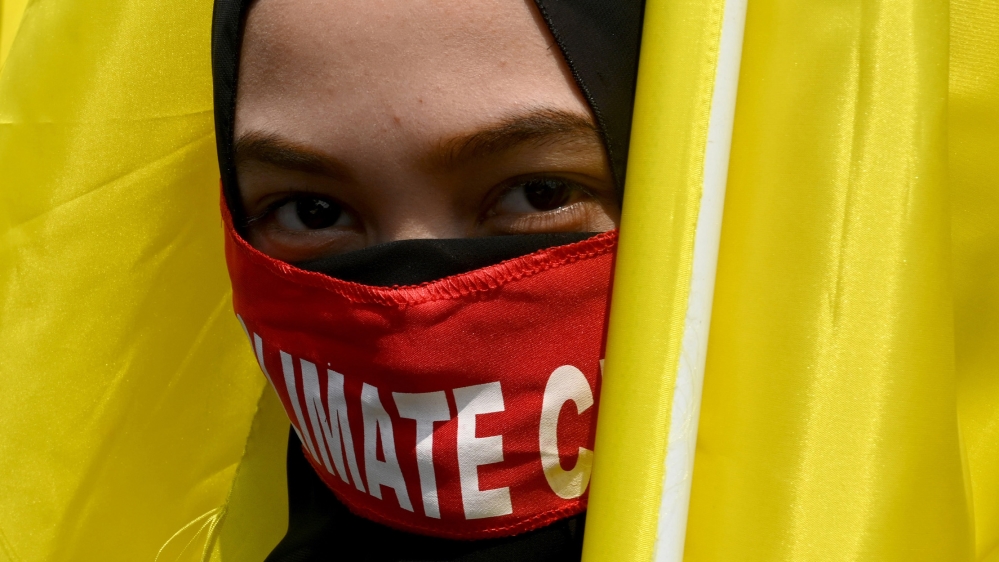 An Indonesian climate activist takes part in a global climate change campaign in Jakarta [Goh Chai Hin/AFP]
In India's New Delhi, one of the world's most polluted cities, dozens of students and environmental activists chanted "We want climate action" and "I want to breathe clean" at a rally outside the Ministry of Housing and Urban Affairs.
They carried banners with some displaying messages like "There is no Planet B."
"I have come to this protest today because I live in the world's most polluted city and our government is doing nothing to change that," said Asheer Kandhari, a student. "Not taking action, a government doesn't realise that they are taking away our futures. It's my future that is being affected by the government's inaction regarding the climate change policy." 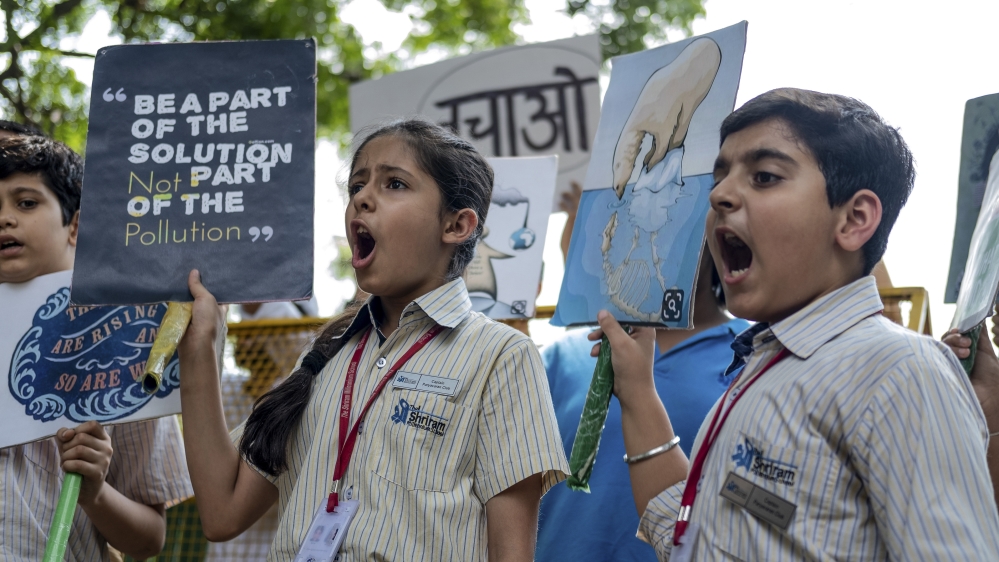 School children shout slogans as they participate in a climate strike in New Delhi [Laurene Becquart / AFP]
No protests were authorised in China, the world's biggest source of greenhouse gas emissions, but Zheng Xiaowen of the China Youth Climate Action Network said Chinese youth would take action one way or another.
"Chinese youth have their own methods," she said.
"We also pay attention the climate and we are also thinking deeply, interacting, taking action, and so many people are very conscientious on this issue."
Global warming caused by heat-trapping greenhouse gases from burning fossil fuels has already led to droughts and heatwaves, melting glaciers, rising sea levels and floods, scientists say.
Carbon emissions climbed to a record high last year, despite a warning from the UN-backed Intergovernmental Panel on Climate Change in October that output of the gases must be slashed over the next 12 years to stabilise the climate.


US President Donald Trump said in 2017 that he would pull the US out of the Paris Agreement under which countries have committed to cutting greenhouse gas emissions to tackle rising global temperatures.
News