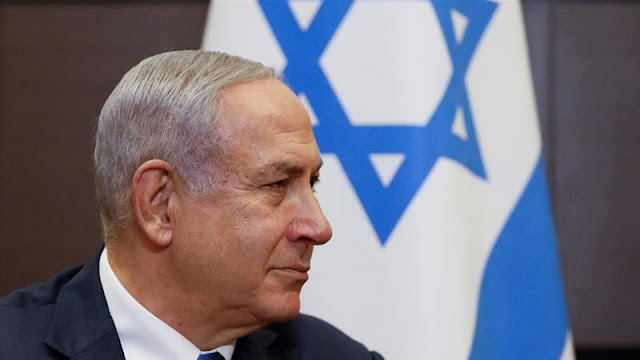 Prime Minister Benjamin Netanyahu has denied a media report stating Israel spied on mobile phones in the vicinity of the White House - and United States President Donald Trump said he believed him.


Speaking on a trip to Russia on Thursday, Netanyahu said there was no eavesdropping on mobile phones around the US presidency because he had forbidden spying against the US.
"I have a directive: no intelligence connection in the United States, no spying," he said. "It's rigorously enforced without any exception. It's a complete fabrication."
A statement from Netanyahu's office echoed his comments and called the report "a blatant lie".
"There is a long-standing commitment and a directive from the Israeli government not to engage in any intelligence operations in the US," the statement said.
Online news outlet Politico reported that an investigation by the FBI and other US agencies concluded that Israel was most likely behind several so-called stingray scanners, which mimic cellphone towers to intercept nearby calls and text messages, that were discovered in downtown Washington in 2017.
Several former national security officials told Politico that forensic analysis on the devices by the FBI and other agencies tied them to Israeli agents.
"It was pretty clear that the Israelis were responsible," one US official told Politico on condition of anonymity.
Citing another former official, the news outlet wrote: "The devices were likely intended to spy on President Donald Trump ... as well as his top aides and closest associates - though it's not clear whether the Israeli efforts were successful."
A former senior intelligence official told Politico that the Trump administration has not taken any action against Israel, nor privately scolded its leaders, following the conclusion.
"The reaction ... was very different than it would have been in the last administration," the official cited by Politico said. "With the current administration, there are a different set of calculations in regard to addressing this."
"I'm not aware of any accountability at all," the official added.
Trump, who calls himself the most pro-Israel president in US history, told reporters at the White House on Thursday that he doesn't believe the allegations.
"I don't think the Israelis were spying on us. I would find that hard to believe," he said, before adding: "Anything is possible."
"My relationship with Israel has been great," Trump said.

Earlier, Israel's foreign and intelligence minister, Israel Katz, said the country "does not conduct any espionage missions in the United States."
"The United States and Israel share between them a great deal of intelligence information and work together to prevent threats and to strengthen the security of the two states," he said.
Stingrays are formally known as international mobile subscriber identity (IMSI) catchers, devices able to monitor and track cellular device communications as they interact with networks.
They are increasingly used by police in criminal investigations to intercept cellphone activity by suspects and have become a focus of controversy for their use without warrants.
Two years ago an unknown number of the devices were discovered inside Washington during a Department of Homeland Security test project investigating the risk posed by the devices.
Their discovery included "locations in proximity to potentially sensitive facilities like the White House," DHS said in a letter to Senator Ron Wyden in May 2018.
But those responsible for putting them in place were not identified.
Politics