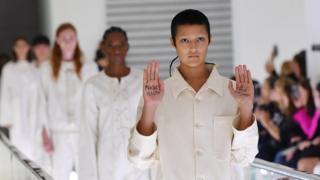 Ayesha Tan-Jones and other models were dressed in white jumpsuits for the show, some resembling strait jackets.


Tan-Jones, who is non-binary and uses they/them pronouns, wrote "Mental health is not fashion" on their hands.
Gucci said the designs were meant to represent "how through fashion, power is exercised over life, to eliminate self-expression".
Posting on Instagram after the show, Tan-Jones wrote: "Straitjackets are a symbol of a cruel time in medicine when mental illness was not understood, and people's rights and liberties were taken away from them, while they were abused and tortured in the institution.
"It is in bad taste for Gucci to use the imagery of straitjackets and outfits alluding to mental patients, while being rolled out on a conveyor belt as if a piece of factory meat."
In another post on Monday, Tan-Jones added that they, along with some of the other models in the show, were donating a portion of the fees they were paid by Gucci to mental health charities.
"Many of the other Gucci models who were in the show felt just as strongly as I did about this depiction of straitjackets, and without their support I would not have had the courage to walk out and peacefully protest," they said.
In response, Gucci said the jackets were meant to be an antidote to the colourful designs in the rest of the Spring/Summer 2020 show.
"These clothes were a statement for the fashion show and will not be sold," Gucci said.
Tan-Jones's protest comes just months after Gucci appointed a diversity chief, Renée Tirado, prompted by two incidents earlier in the year.
In February, Gucci was forced to withdraw a jumper after critics said it resembled a blackface minstrel. The black balaclava jumper, which was being sold for n $890 (£715), covered half of the model's face and had large red lips knitted onto it.
Then in May, the fashion house was accused of cultural appropriation for a $790 headpiece that looked like a Sikh turban. It attracted criticism from the US-based Sikh Coalition, which tweeted: "The Sikh turban is not just a fashion accessory, but it's also a sacred religious article of faith."
Style