Manchester United has gained the respect from the WSL 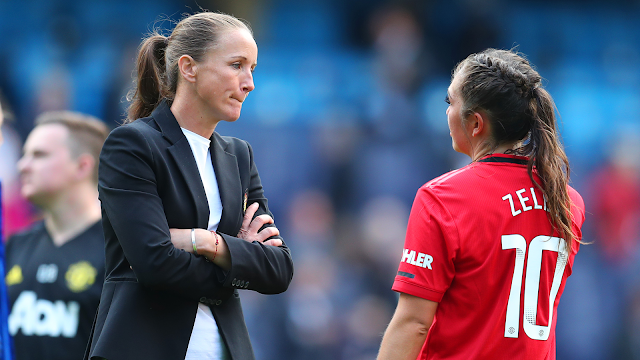 Manchester United sent a statement of intent to the rest of the FA Women’s Super League despite losing their opening game to rivals Manchester City, manager Casey Stoney believes.


The Red Devils, newly-promoted after winning the FA Women’s Championship last season, lost 1-0 in the first professional derby between the two teams.
But Stoney was impressed with the performance, and believes there are plenty of positives to take forward into their next game against reigning champions Arsenal.
“It doesn’t get any easier that’s for sure,” Stoney said. “We’ve got to play Arsenal next Monday so we recover very well – we’ve got a few knocks so we assess how they are – and we talk about the positives we can take from the game, and the learning points as well.
“I think, personally, other clubs will look at today and go, ‘they’ve had a go and they’ve competed’ and therefore I think we’ve given ourselves a bit of respect within the league.
“It’s bittersweet isn’t it,” the 37-year-old continued, describing the team’s feelings post-match.
“I think the sweet part is that you know you’ve competed, and I think it’s given the players a real belief now that we can compete.
“But it’s obviously bitter because you’ve lost the game.”
Over 31,000 fans watched City prevail at the Etihad Stadium, with an estimated 2,000 of those supporting the away team.
It was a triumphant day for women’s football, with a new record crowd for a WSL game set – and with games at Stamford Bridge, as Chelsea take on Tottenham on Sunday, as well as the London Stadium and Tottenham’s new stadium all to come.
But Stoney believes there should be no rush for her team to play at Old Trafford, with the focus on getting people through the gates at their own home ground, Leigh Sports Village, first and foremost.
“My opinion, and it’s only my opinion, is that we stay at Leigh and we consistently try and get good crowds,” she said, echoing thoughts of opposing manager Nick Cushing.
“We need to sell out Leigh before we even look at Old Trafford because it becomes a one off.
“You think about the size and the scale of Old Trafford. You put 30,000 in there and it’s still basically empty.
“I think it’s about having our home ground as our home ground, making sure that people know where it is, when it’s on and getting people through the turnstiles there first.
“I think it shows how far the women’s game has come that 31,000 show up, want to watch the game and hopefully they will have found it an entertaining game and will want to come back.”
A measure of Man United’s own ability to draw fans will be seen in their next game, which will be their first home game in the WSL.
They take on Arsenal on Monday, September 16, with kick-off 7:30pm BST (2.30pm ET).
Sports