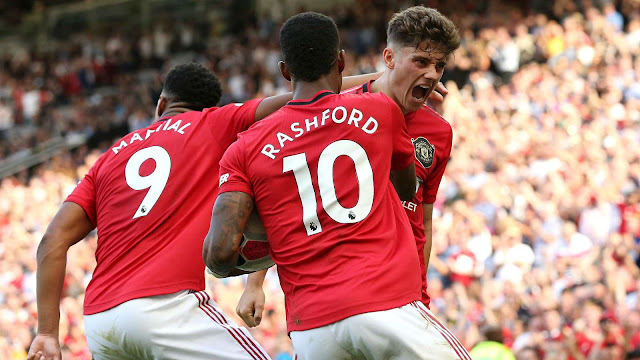 
A run to the Champions League quarter-finals and an increase in broadcasting revenue helped the Red Devils achieve record figures for the fiscal year.
Revenues were within the estimated range of £615m ($767m) to £630m ($786m), as noted in their Q3 results, but are expected to fall to £580m ($724m) or below in 2020 due to a lack of Champions League football.
United are second only to Real Madrid in terms of global revenue in football, the La Liga giants having generated £662.5m ($826m) in 2018, according to this year's Deloitte Football Money League.
The positive financial figures come despite a difficult run of results for Ole Gunnar Solskjaer's side since March, the Red Devils winning just five of their past 19 matches in all competitions.
Executive vice-chairman Ed Woodward said in a statement: "We remain focused on our plan of rebuilding the team and continuing to strengthen our youth system, in line with the philosophy of the club and the manager.
"This is reflected in the recent addition of three exciting first-team players, key player contract extensions and the talent we have coming through our Academy. Everyone at Manchester United is committed to delivering on our primary objective of winning trophies."
United signed Daniel James, Aaron Wan-Bissaka and Harry Maguire in the most recent transfer window for a combined reported fee of close to £143m ($178m).
They sold Romelu Lukaku to Inter for approximately £74m ($92m) and also sent Alexis Sanchez on loan to San Siro, helping to reduce their costs.
New contracts for Phil Jones, Victor Lindelof, Scott McTominay, David de Gea, Marcus Rashford, Anthony Martial and Luke Shaw have also contributed to a £36.3m ($45m) increase in employee benefit expenses compared to last year.
In February, the club announced that sacking Jose Mourinho led to an "exceptional" cost of £19.6m (£24m).
The club's net debt has fallen by £50.1m ($62m) to £203.6m ($254m), primarily due to an increase in cash flow based partly on commercial contracts.
In 2019, United agreed either renewed or new terms on 10 global sponsorship deals and struck a partnership with Harves China, a real estate development firm, "to open multiple club 'Experience Centres'".
Sports