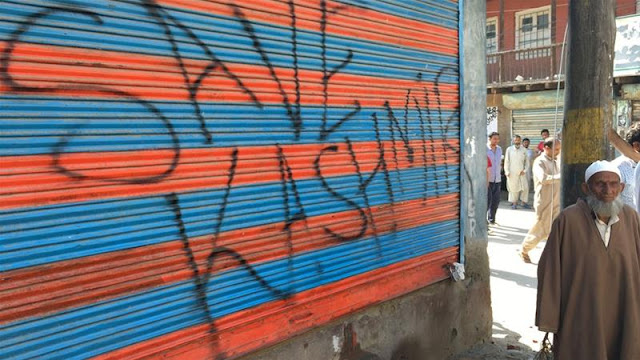 Srinagar, Indian-administered Kashmir - A month since India's powerful Home Minister Amit Shah announced the removal of the
disputed Kashmir region's special status, thousands have been detained, with some alleging torture by the Indian security forces.

In a village in southern Kashmir, a 22-year-old man said he was picked up in a midnight raid and tortured for more than an hour along with a dozen other Kashmiris.
"I was beaten with sticks, rifle butts and they kept asking me why I went for a protest march. I kept telling them that I didn't, but they didn't stop. After I fainted, they used electric shocks to revive me," he told Al Jazeera on condition of anonymity.

"They began pulling my beard and even tried to put it on fire. Then, someone hit me on the head and I fainted. It is then they, perhaps, realised that I might die. So, they asked my friend to take me home. I regained consciousness after two days and it's been 20 days and I still can't walk properly," he said."Once they realised I was innocent, they wanted me to name a stone-pelter. I told them, I don't know anyone. So, they continued beating and electrocuting me. They wanted all of us to give the names of stone-pelters.
Al Jazeera reached out to the Indian army spokesperson for their response, but did not receive any until the time of the publication of this article. 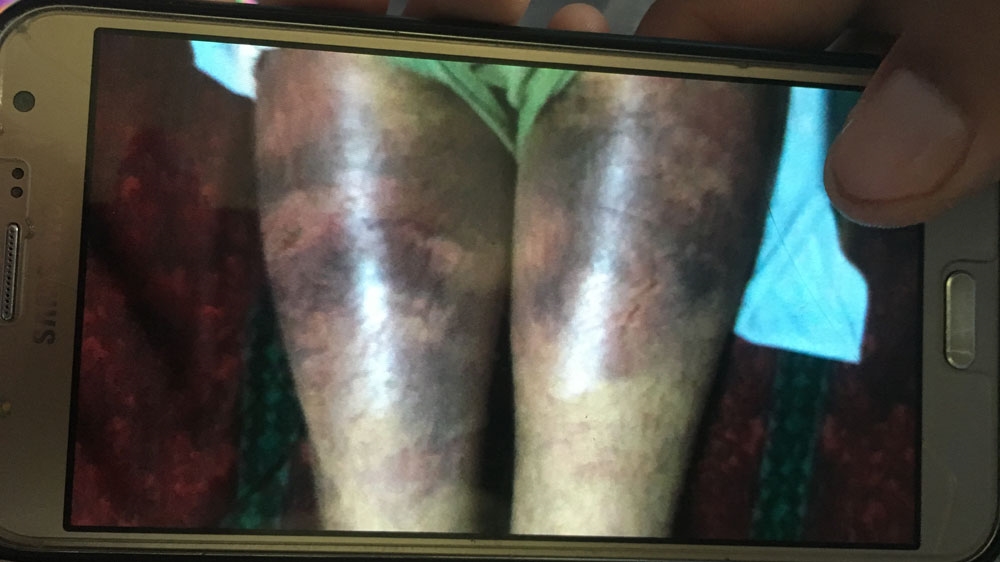 'Living in so much fear'

Nearly 30km away, residents in another village said they witnessed one of the worst crackdowns by the security forces.
A young man in his late 20s was badly beaten and is still not able to walk without support. He had bruises all over his body. In some places, the skin had come off, making it extremely painful for him to even rest.
This man also refused to be identified for fear of reprisal. "The army personnel will identify me by my wounds and I don't want that," he said.

After I fainted, they used electric shocks to revive me.
A 22-YEAR-OLD KASHMIRI

Residents said many young men from the village had been detained by the security forces, while their parents remained clueless about their location and wellbeing.
A tip about a young man tortured by security forces led this reporter to another village in south Kashmir, a stronghold of Kashmiri rebels who either want independence or a merger with Pakistan.

"The security forces would come to know of our conversation. If they do, I will have to face the consequences," he said.This young man declined to speak about his detention and torture. He did not share any details, including his name or age and requested that even the name of his village should not be published.
"The entire village knows that media is here. I can't trust anyone, even my people, because we all are living in so much fear. Someone might inform them to protect his family," he added.
His friends said he was brutally beaten by the security forces.

Since New Delhi's decision to abrogate Article 370 of the Indian constitution - which granted a measure of autonomy to India's only Muslim-majority state - men are being picked up by the security forces in midnight raids, said Mohammed Shafi Bhat of Shopian district.
He claimed that thousands have been detained since August 5 and more are being picked up and even tortured to instil fear.

The army personnel will identify me by my wounds and I don't want that.
A 20-YEAR-OLD KASHMIRI MAN

Media reports said close to 4,000 people have been picked up in a month. But the Jammu and Kashmir government said there was "no centralised figure" on the number of detainees.
An apple farmer in Shopian said he has instructed his sons to not venture out of home even for essential commodities or to spray pesticides on the apple crop.
"If they are out, I worry that they might be picked up. So, I don't let them out. It is me who usually goes out to buy essential commodities. I wouldn't wish this even for my enemies," he said.

In Pulwama district, where a suicide bombing in February brought India and Pakistan to the brink of another war, 18-year-old Mamur Rasul was picked up by the local police on August 9 at about 2am."After you knocked, we got worried. We thought someone had come to pick up my boys," said the farmer.
His father Ghulam Rasul claimed his son has been sent to a jail in the north Indian city of Agra. He said he hasn't spoken to his son since then.
"First, they beat him up and took him to the local police station. On August 14, I was told that he has been booked under the Public Safety Act (PSA) and shifted to Srinagar's Central Jail," Ghulam Rasul told Al Jazeera.
"When I reached Srinagar, I was told that he, along with 47 others, had been transferred to Agra. Most of those detained are being sent to other parts of the country, which has made it impossible for families to reach out to them," he said.
A 67-year-old man, suffering from diabetes, was picked up from Kupwara district on August 4. He is lodged in Srinagar's Central Jail, where his wife and two sons came to visit him.
"He was unwell and rarely went out. But he was still picked up. I worry for his health," said his wife Hazrat Begum, who travels a distance of 90km to meet her husband.

Detentions are not new in Kashmir, where anti-India sentiment runs deep. Tens of thousands of civilians have been killed since the armed rebellion erupted in the late 1980s.
Thousands of Kashmiris have been arrested under the PSA, which allows preventive detention of people against whom there may be no recognised criminal offence.
A United Nations report published in July said the Indian government "continues to use various forms of arbitrary detention to target protesters, political dissidents and other civil society actors".
Several other human rights groups have accused India of using detention and torture to counter rebellion in Kashmir, with impunity granted to security forces under the controversial Armed Forces Special Powers Act (AFSPA).
In another report published last year, the UN called for the repeal of AFSPA, which has been dubbed as draconian legislation by the rights bodies.
Locals said they were stunned by the unprecedented crackdown since the region was put under lockdown on the night of August 4.
"They have detained the likes of Farooq Abdullah, Oman Abdullah and Mehbooba Mufti, who chose a democratic India. If they can detain them, then we are just ordinary people," said Ghulam Rasul, referring to the three pro-India former chief ministers of the Jammu and Kashmir state.
Human rights lawyer Pervez Imroz, who has been pursuing cases of illegal detentions and torture by the security forces, said there was no way to know how many people are in custody because of the communications blackout. He said the number could be in thousands.
"Detentions and torture are not new to Kashmir. But earlier, we would get information through different modes of communication. Now, it is very hard to verify each case without any access [to them] or means of communication," he said.
"What we are witnessing is unprecedented and the true numbers would only be available once communication is restored."
News