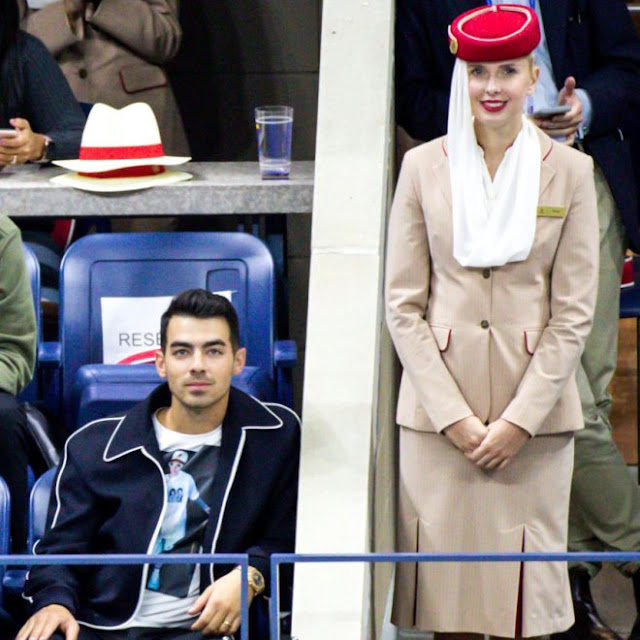 The singer — who enjoyed the event from the Emirates Airline suite — was spotted in a T-shirt that featured a photo of Justin Bieber. In the pic, the pop star, 25, wore a tee with a pic of the Jonas Brothers. Jonas finished his look off with a dark jacket.


The Disney Channel alum watched as Spain’s Rafael Nadal bested Italy’s Matteo Berrettini and Russia’s Daniil Medvedev overcame Bulgaria’s Grigor Dimitrov for a win.
Joe Jonas and Sophie Turner: A Timeline of Their Romance
Jonas joined his now wife, Sophie Turner, at the US Open in September 2018. However, the actress, 23, is currently in France promoting her upcoming film Heavy at the Deauville American Film Festival.
Celebrities Dating Athletes
The couple made things official in May when they tied the knot in a surprise Las Vegas wedding. The Dark Phoenix star and the DNCE frontman married for a second time in France the following month.
Volume 90%
Jonas is not the only famous face set to make an appearance at the US Open. Us Weekly confirmed that Duchess Meghan traveled to New York City via a last-minute flight on Friday to watch her friend Serena Williams play Canadian tennis star Bianca Andreescu. The match is set to take place on Saturday, September 7.
“Meghan is very excited to be supporting and watching Serena,” a source revealed, adding that the 38-year-old Duchess of Sussex “loves getting over to New York.”
Entertainment