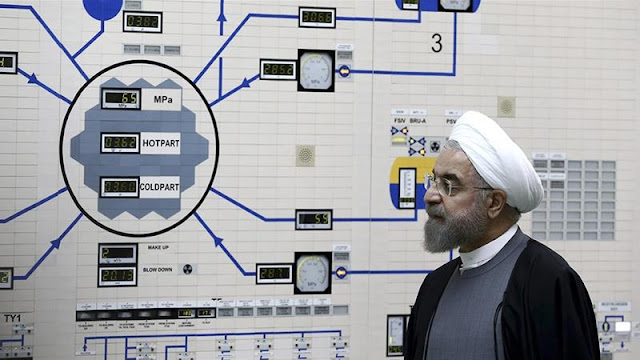 Iranian President Hassan Rouhani has ordered the removal of all limits on nuclear research and development - the third major step to scale down commitments to the 2015 nuclear accord with world powers.


"I, as of now, announce the third step," Rouhani said on state television late on Wednesday, just as the United States announced that it was imposing sanctions against an oil shipping network with ties to Iran's Revolutionary Guard.
"The atomic energy organisation [of Iran] is ordered to immediately start whatever is needed in the field of research and development, and abandon all the commitments that were in place regarding research and development."
Specifically, Iran would start to develop centrifuges to speed up its uranium enrichment, without overstepping, as yet, the limits set under the nuclear deal.
Iran in July abandoned two other nuclear commitments: to keep its stockpile of enriched uranium below 300kg and a 3.67 percent cap on the purity of its uranium stocks.
The announcement came hours after Rouhani had threatened to take the step if Europe failed to provide a solution by Friday.
"Iran's third step is of an extraordinarily significant nature," Rouhani said earlier during the day, without detailing what that would entail.
"I see that it's unlikely a conclusion will be reached with Europe today or tomorrow," he said, suggesting European powers have another two months to resume talks to save the landmark nuclear accord.
"They know what we want, and we know what they want."
Iran wants Europe to come up with a solution to sell its oil abroad after the US withdrew from a 2015 nuclear deal and reimposed devastating sanctions.
A short time after Rouhani's statement, US officials announced new sanctions on Iran, this time aimed at a shipping network it said was run by Iran's Revolutionary Guard to allegedly smuggle oil.
The US also offered a reward of up to $15m for anyone with information that could disrupt Iran's already faltering economy, signalling that it is not letting up pressure on Tehran.
In two separate moves already, Iran reduced its commitments outlined in the deal and promised further measures unless the European signatories of the pact did more to protect Tehran from the effects of the US "maximum pressure" sanctions campaign.
The nuclear deal - agreed on by Iran, United Kingdom, China, France, Germany, Russia and the US - offered Tehran relief from many international sanctions in exchange for accepting curbs on its nuclear programme.
Since Washington pulled out of the deal last year and reimposed sanctions, Iran has insisted it wants to save the pact but has demanded the remaining signatories - especially the Europeans - provide additional economic support.

Meanwhile, Iran announced the release of seven of the 23 crew members of the seized British-flagged tanker Stena Impero on humanitarian grounds.
The Swedish-owned Stena Impero was seized by Iran's Revolutionary Guards on July 19 in the Strait of Hormuz waterway for alleged marine violations, two weeks after the UK seized an Iranian tanker off the territory of Gibraltar.
The Iranian ship, Adrian Darya 1, formerly known as Grace 1, was released in August. Stena Impero remains in Iranian custody.
Sweden's Foreign Minister Margot Wallstrom said in a statement the Swedish embassy in Tehran had confirmed that seven of the 23 members had been released.
"I note with relief that part of the crew has been released. I now look forward to the release of the entire ship and the rest of the crew. This is, of course, very gratifying for the crew and their relatives," Wallstrom said.

The statements came as Iranian officials appeared to give mixed signals in response to a French proposal to save the agreement by offering Iran about $15bn in credit lines until the end of the year if Tehran comes fully back into compliance.
Iranian officials initially said they were considering the French plan when news of it emerged on Tuesday. Deputy Foreign Minister Abbas Aragchi appeared to back its main terms on Wednesday.
"Our return to the full implementation of the nuclear accord is subject to the receipt of $15bn over a four-month period, otherwise the process of reducing Iran's commitments will continue," the semi-official news agency Fars quoted Aragchi as saying.
But soon after, Iran's English-language Press TV issued a short report stating: "Iran has rejected a $15bn loan offered by EU," without giving further details.
Western and Iranian sources had described the French plan as the offer of a credit line, not a loan, although the precise details have not been made public.
Brian Hook, the US State Department coordinator on Iran, has ruled out the French-proposed credit line, saying Washington is "not looking to grant any exceptions or waivers".

US sanctions imposed after US President Donald Trump withdrew from the deal have curbed Iran's oil exports and sent its economy into freefall, while what is left of the accord steadily unravels.
At the same time, tensions have spiked across the Gulf over mysterious tanker explosions, the shooting down of a US military surveillance drone by Iran and the US deploying more troops and fighter jets to the region.
The International Atomic Energy Agency confirmed last week that Iran's stockpile of low-enriched uranium still exceeds the amount allowed by the deal.
The UN agency also said Iran continues to enrich uranium up to 4.5 percent, above the 3.67 percent allowed under the agreement but still far below weapons-grade levels of 90 percent.
French President Emmanuel Macron is leading talks seeking relief for Iran and a de-escalation of tensions. This week, Iran's Foreign Minister Mohammad Javad Zarif travelled to Moscow while Araghchi went to Paris and elsewhere in Europe to press for a solution.
Politics