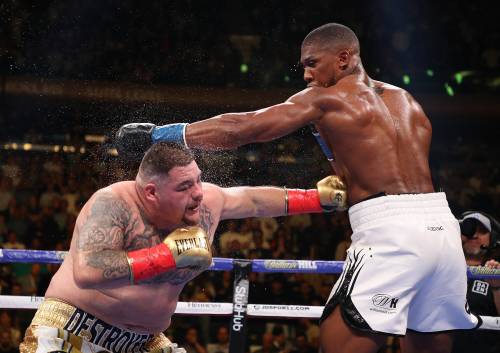 Anthony Joshua put on what he calls 'my super-hero cape' when he went to Saudi Arabia this week to cast himself as a catalyst for change in a land which his promoter Eddie Hearn is being criticized for choosing as the venue for his next fight.


He will put it on again when he returns to Riyadh in December, as a boxer striving to regain the powers which made him world heavyweight champion.
Joshua talked politics, prize-fighting, and his 'highly motivated hunger' to regain the WBA, IBF, WBO, and IBO belts behind which Andy Ruiz Jr sat proudly at the other end of the table in a West London park on Friday, wearing a sombrero as broad as his smile.
Should he lose for a second time in his career to the portly Mexican who knocked him out to claim those titles in New York three months ago, AJ insists he will not retire from the ring in which he has made his fame and fortune.
Dismissing suggestions that he might lose his appetite for the hardest game, he said: 'We will face a big problem if I do lose the rematch.
'But I will go on even if I lose my next 10 fights. I know how to fight but if something that ridiculous were to happen I would come back to win the eleventh.
'I am still loving boxing. It's what defines me. It's not about losing but how you come back. Muhammad Ali and Mike Tyson proved that.'
Joshua is also conscious of the example he sets to young people and aware of the human rights controversies besetting Saudi Arabia.
He says: 'I know I'm a role model and I want the right legacy for my kids and all the boxing fans of the future. I am in a position where I can have an impact wherever I go.
'It was the same after I lost to Andy, had some time on my hands and went to Nigeria (his parental homeland). I didn't go and sit on the beach of some private island. I went to the ghettos, where I can do some good. Tell you the truth I'm more at home thereafter the way I grew up.
'I don't say much about my charities because it's not something to boast about. We all do what we can and I am doing as much as I can for as many orphans as possible.
'I was mobbed in Saudi and I hope I can go back more than once more to have an impact on attitudes. My going gives that country the platform to respond to the criticism. I put on my super-hero cape wherever I go but one man can't do it on his own. It needs us all to take part.'
Riyadh, on Wednesday, New York on Thursday and London on Friday have been the three jet-lagging whistle stops on his and Ruiz's promotional tour before they enter 12-week training camps.
Joshua admits he will need to make changes from the way he boxed when being stopped by Ruiz in seven nightmare rounds in Madison Square Garden.
In the manner of a teacher admonishing a student, he says: 'Must do better. Must do better. If I fight the same fight again I might get the same result. If I fight a different fight I can get a different result.'
Many in the fight game suspect that Ruiz has got his number but Joshua says: 'There isn't time to change completely and that wouldn't be wise anyway. But we can alter some bits and bobs.'
He vows to be 'lighter physically, sharper mentally, stronger and more clever. I'm also making some changes to my lifestyle to realign my starts and shoot straighter. But I'm not becoming angrier.'
There has been speculation that a mean streak might surface in adversity but he says: 'I'm not going to change my character after one defeat. I am who I am. Andy is still the same nice guy.
'I didn't like losing but I'm happy for him that he's fulfilled his dream to be world champion and for giving hope to the Mexican people.'
The respect is mutual. Ruiz responds: 'I admire Anthony as a great champion and for all he has achieved.
'But I've told him that I want more than just 15 minutes of fame and I'm ready to die to keep the belts for my kids and my people.' Culled from MailOnline.
Sports