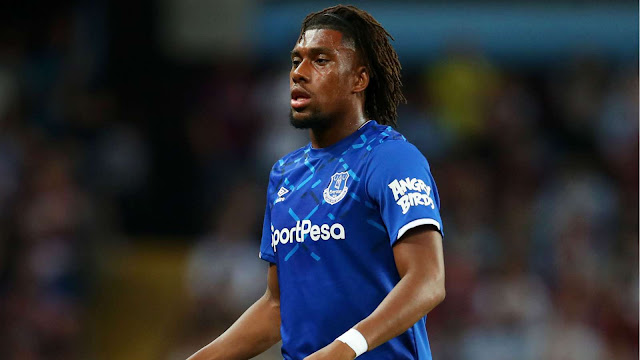 Alex Iwobi said he is focused on making a name for himself at Everton, in order to dismiss the ‘youngster’ tag he was referred to at Arsenal.


Iwobi joined Arsenal while in primary school and developed through the ranks at the club, where he made over 100 appearances for the first-team.
The Nigeria international is gradually establishing himself on Merseyside with two goals in four matches for the Toffees across all competitions so far.
Following the warm welcome he received from his new club faithful, Iwobi revealed he is feeling like an Evertonian already and his desire to contribute more to Everton’s success this season with assists and goals, a demand Marco Silva has laid out for him.
“From the moment I came here, I was welcomed really nicely and I feel like an Evertonian,” Iwobi told the club website.
“I am proud to be here and I want to show my teammates and the fans that I will give 100 per cent for them.
“It was good to open my account. The position I play – the main thing you get noticed for is goals and assists.
“It is not the first time I’ve heard it [the manager’s demand for him to score more]. I even set myself targets each game to at least create a chance or try to have shots on goal.
“I want to better myself and it [scoring and assisting] is something I want to work at. I came through at Arsenal and was probably always viewed as a youngster for that reason.
“It is time for me to make a name for myself, to try to become a big player.
“I will have an opportunity at Everton to express myself, the manager and players have given me the freedom to do that. It is a new challenge and I am ready for it.”
Iwobi was in action for 90 minutes on Sunday as Everton bowed to a 3-1 loss to Bournemouth at the Vitality Stadium, it was his third Premier League appearance for the Toffees this term.
Sports