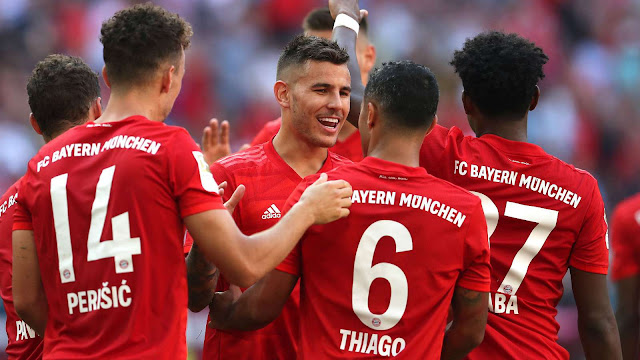 Lucas Hernandez says the pressure of a club-record transfer fee at Bayern Munich isn’t on his mind as he enjoys his long-awaited return from injury.


The 23-year-old defender joined the Bundesliga champions from Atletico Madrid for €80 million (£68m/$90m) after a deal was agreed in March, by which point he had already played his last game for his previous employers.
He underwent surgery on a knee ligament injury sustained in mid-February, only a few weeks after returning from an earlier knee problem. Speaking with l’Equipe, Hernandez revealed some fairly gruesome detail about his injury woes.
“It wasn’t easy to leave while injured and without finishing the season,” he admitted. “But I really shot my knee in October and November to go as far as possible with Atletico.
“I played six matches with a hole in the ligament. That’s what the surgeon told me when they operated.”
After so long out of action, the France international will have been delighted with his season so far.
Having watched from the bench in Bayern’s opening game of the Bundesliga season, he started in the wins over Schalke and Mainz and earned a recall to Didier Deschamps’ France squad for the European qualifiers against Albania and Andorra.

Now, the challenge for Hernandez is to establish himself in Niko Kovac’s side and pay back the faith Bayern have shown in him.
“I never put myself under pressure, but I am aware of all the financial effort made by Bayern to bring me in,” he said.
“They’ve paid for a defender. Football today is full of these crazy sums, I know the reality. That’s why I worked like crazy and made every effort to get myself match-fit quickly.
“I don’t want to disappoint Bayern or the supporters. I’m on schedule, and I’m almost 100 per cent after two Bundesliga games.
“Bayern did everything to get me, and to make sure everything went well. Of course I will do everything for them.
“I started speaking German pretty quickly. I’m not a complicated person – I’m actually pretty nice! I integrated quickly. My French team-mates have been great.
“There is a strong French culture in Munich, with all the great players who have been here like Bixente Lizarazu, Willy Sagnol or Franck Ribery. He’s an idol here! Bayern is a big club but a small family.”
Hernandez has linked up with French compatriots Benjamin Pavard and Mickael Cuisance, with all three playing in the 6-1 win over Mainz that preceded the international break.
When they return, Bayern travel to RB Leipzig in an intriguing early-season clash at the top of the table before a home fixture with Crvena Zvezda to kick off the Champions League group stage.
Sports