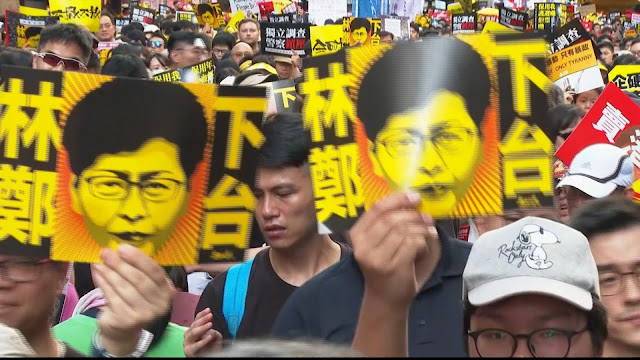 Hong Kong, China - Protesters vowed to keep on demonstrating even after leader Carrie Lam attempted on Wednesday to defuse weeks of political chaos by formally withdrawing a controversial extradition bill.


The withdrawal comes more than two months after Lam first suspended the legislation in mid-June following record-breaking marches in Hong Kongthat drew as many as two million people, according to estimates by protest organiser Civil Human Rights Front (CHRF).
Seething anger has failed to subside since then with a recent march in late August drawing 1.7 million demonstrators, according to CHRF.
The divisive bill would have allowed for Hong Kong residents to stand trial in mainland China and stoked fears in the former British colony that it was losing its autonomy promised until 2047 under the "one country, two systems" agreement when London handed over control to Beijing in 1997.
While Lam promised the bill was officially dead on Wednesday, the feeling among many protesters was her actions were too little, too late.

Many pledged to continue taking to the streets until their five demands are met, including that Lam step down and for the government to initiate an independent commission into police violence.
"The most clear message I have is that we are not backing down," said protester Hermione, a lawyer who asked to only be identified by her first name for security reasons.
"I think that is a childish and naive expectation of the government to only answer to one of the five demands and expect people to back down."
She said the bill's formal withdrawal will only "stoke the fire even more".
"No one trusts Carrie Lam any more so anything she says is going to be interpreted as another tactic to distract public opinion to try to divide support for protesters."
Similar feelings were shared by a protester named Jack who said the five demands and "no less" were a major rallying cry and still on the minds of Hong Kong people.
"I think ultimately the people have been requesting five demands as a whole so it's a package. It's not a multiple-choice list of options," he said. "Basically people can stand firm as one, and the request has always been five demands and everything should be met as a whole."

Police tactics have become a major focus of protesters' ire over the past two months as security forces have fired rubber-coated bullets, tear gas, and water cannon on protesters while more than 1,000 people have been arrested, including children as young as age 12.
While Lam has promised police tactics will be reviewed, she said it will occur under the Independent Police Complaints Council, a body within the Hong Kong Police Force - as opposed to an independent inquiry.
"There is no effective way to control the power of the police - they basically have unlimited power these days and there's no check or balance," said protester Kay who works in financial services.
"We don't know who they are, there's no effective complaint mechanism for whatever the police do wrong. And it's just getting more and more serious," she said, referring to the fact many officers appear on the streets without numbered badges.
Kay said the more serious issue at stake was that protests had revealed deep structural problems within the Hong Kong government, including its promised autonomy.
"People realised over the last two months the importance of democratic elections. The past three months have revealed that, first of all, Beijing has a much heavier hand in the so-called 'autonomy' of Hong Kong," she said.
In late August, a survey by the Hong Kong Public Opinion Research Institute reported "satisfaction" with Lam at 24.6 percent - an all-time low for any leader of the territory. Trust in the Hong Kong government, meanwhile, dropped to 27 percent.
Politics