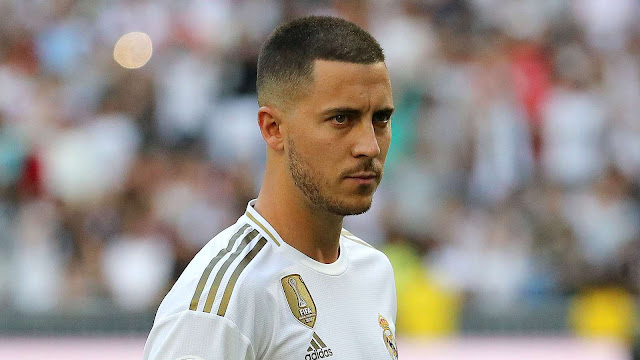 Eden Hazard is ready to make his Real Madrid debut this weekend but Zinedine Zidane intends to take extreme caution with his fit-again star signing.


Belgium international Hazard has been cleared to make his first La Liga appearance against Levante on Saturday, three months after arriving from Chelsea in a deal that reportedly could eventually cost Madrid €140 million.
An ill-timed thigh injury on the eve of the new season delayed the 28-year-old's competitive bow, which appears likely to come from the bench at the Santiago Bernabeu.
"We have to go little by little with him," Zidane said. "He's been injured for three weeks. He's back training this week.
"We all want to see him play. We've got seven games in 21 days. We have to go carefully with him.
"We know what the situation is – he's ready and that's the most important thing.
"I'll be the one in charge of giving him minutes here and there and not trying to push him too much, trying to get the best out of him.
"We've got a lot of matches coming up, not just this one tomorrow, and we need to use our heads with Eden Hazard. So let's be calm. We're all ready and so is he."
While star signing Hazard is back in the mix, Madrid will be without Luka Modric for their fourth La Liga fixture after the midfielder suffered a right leg muscle injury.
The 34-year-old, who played two full matches for Croatia during the international break, could also miss the midweek Champions League trip to Paris Saint-Germain.
Madrid have been riddled with fitness issues throughout the early part of the new season but head coach Zidane would not apportion blame for the latest setback.
"Everyone tries to do the best for the players," he said.
"Luka played two games in four days [with Croatia]. That's what happens. We can't think too much about it, we just want Luka to get fit quickly to help us.
"The fact he's injured now and can't play tomorrow, we just have to accept it."
Zidane added: "I think all the clubs have similar problems. The fact we've got a lot of international players as well makes things difficult.
"But we work well on the training field, we've got the best backroom staff, I trust them, so we just hope after the injury to Luka we don't have any more."
Sports