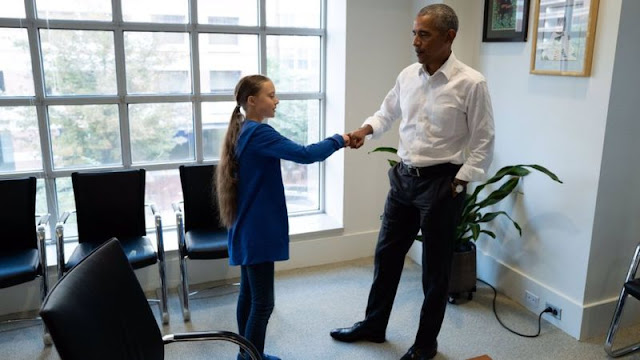 
Mr Obama was clearly impressed with the 16-year-old, sharing a picture of their meeting with his 108.6 million Twitter followers along with the caption:
"Just 16, @GretaThunberg is already one of our planet's greatest advocates. Recognizing that her generation will bear the brunt of climate change, she's unafraid to push for real action. She embodies our vision at the @ObamaFoundation: A future shaped by young leaders like her." 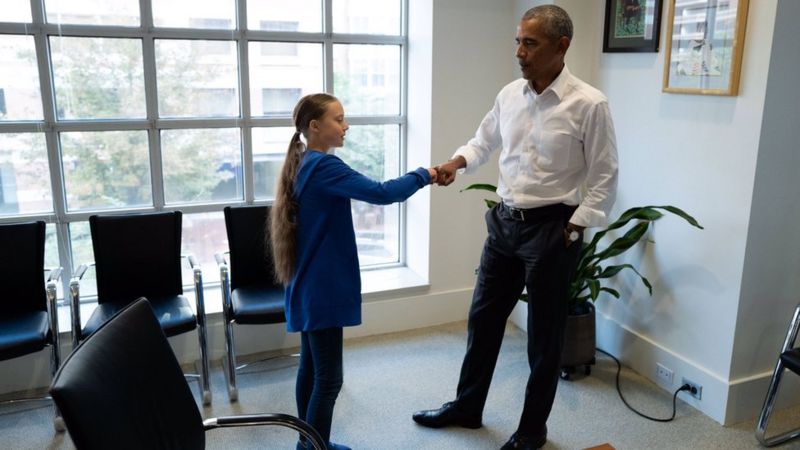 TWITTER/@BARACKOBAMA
America's former president met with the 16-year-old climate activist
More on Greta Thunberg
Greta Thunberg makes musical debut on The 1975 album
Greta defends herself against trolls
It's been a big year for Greta Thunberg
What else has Greta been up to in New York? 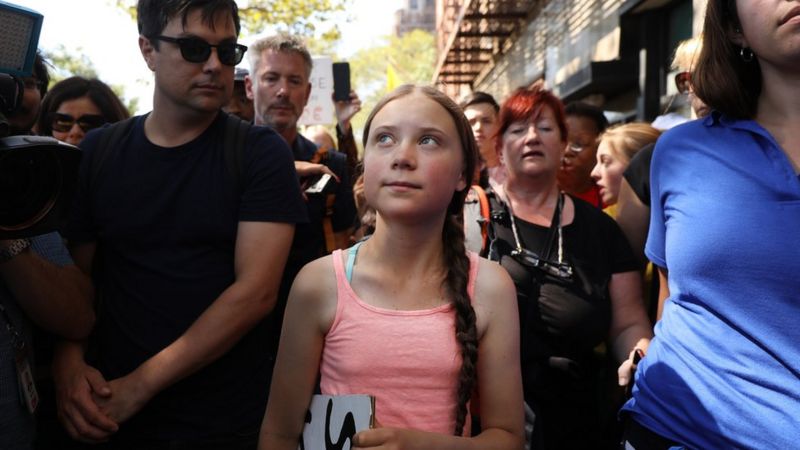 GETTY IMAGES
Greta has been taking New York by storm on her fight for climate justice
Since Greta's zero-emission yacht sailed into New York harbour on 28 August, the climate activist has been busy spreading her message.
The 16-year-old chose to make the entire journey from the UK to the US by sea, rather than flying, to minimise her carbon footprint and reduce damage to the environment.
Greta originally left Europe on the 14 August and travelled to New York across the Atlantic ocean in preparation for the United Nations (UN) Climate Change summit, taking place on 20 and 23 September.
But since arriving in New York on the 28 August, Greta is making full use of her time - before the climate change talks even begin.
Amnesty International
Greta recently won Amnesty International's Ambassador of Conscience Award for her work and activities surrounding climate change.
She told the crowds that the award was for the millions of people around the world who have taken part in the Fridays for Future movement.
Fridays for Future
For the short amount of time that Greta has been in New York, she is keeping to her word on protesting as she continues her 'Fridays for Future' strikes. 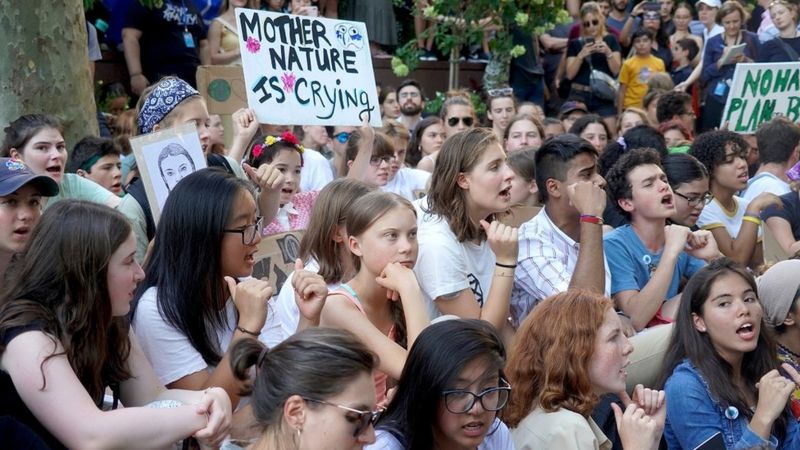 GETTY IMAGES
Greta joined a big protest outside of the UN Headquarters not long after arriving in New York
Her first strike was just two days after she arrived, proving that there's no rest for the young activist.
The strike took place outside the UN Headquarters alongside hundreds of young people protesting about climate change.
A week later and Greta has been on a second Friday strike with a school in New York.
The campaigner is now planning her next strike with a school in Washington D.C. on Friday outside the White House where the US president lives. 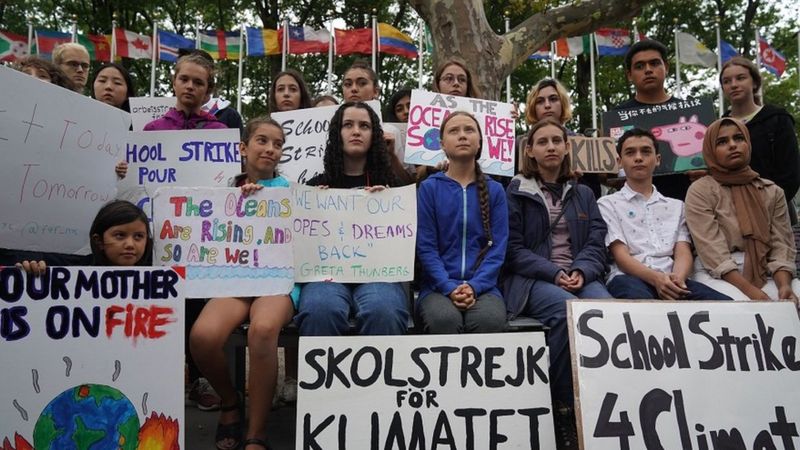 GETTY IMAGES
Greta has continued to strike every Friday with school children in America
Spreading the message
On Monday Greta took part in a live webcast called The Right to a Future.
During the event Greta spoke about her experience in New York so far, joking that they "use a lot of air conditioning" in the city and that "coming from the boat where you have nothing... you could suddenly smell a lot of pollution". 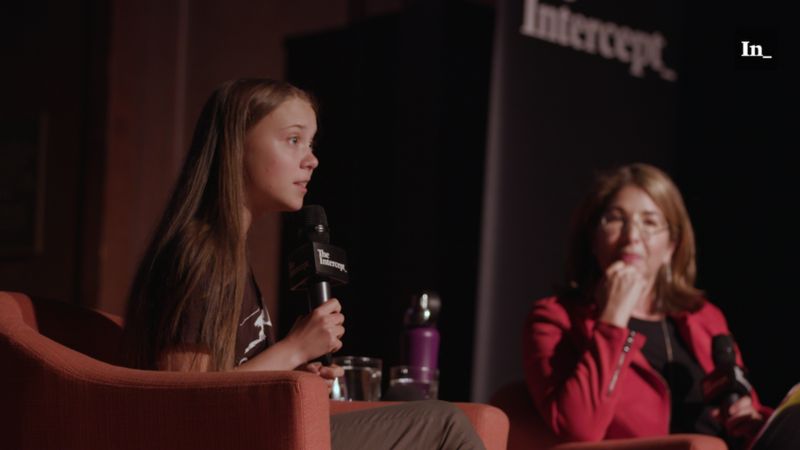 THE INTERCEPT
Greta spoke out about climate justice during The Intercept's live stream event
She then explained why she is so passionate about the climate crisis saying that "if you know how important it is then you know that you have the responsibility to do something".
Greta also spoke about her Aspergers syndrome, which has contributed to her "say it how it is attitude" and her determination to find out every detail about climate change and the need to act on it immediately.
However, Greta wasn't the only young person speaking about climate change on the webcast. The panel also featured 17-year-old activist Xiye Bastida.
Who is Xiye Bastida? 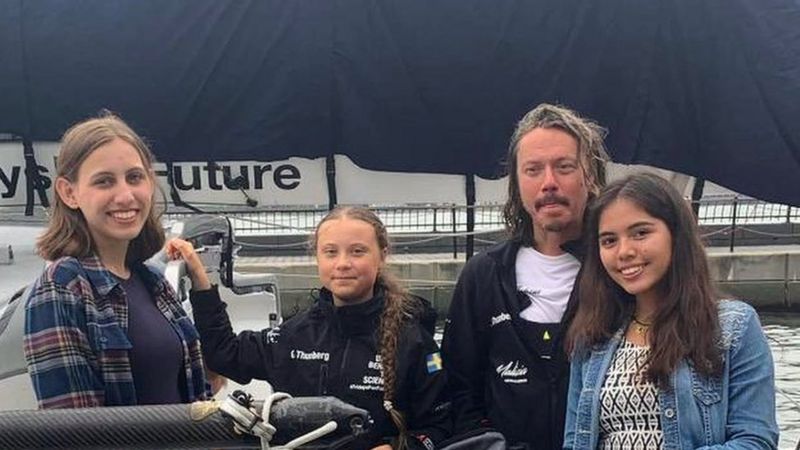 TWITTER / @XIYEBASTIDA
Xiye Bastida (far right) welcomed Greta when she arrived in New York
Xiye Bastida is a teenage climate activist from Mexico, but she now lives in New York.
During the first Fridays for the Future climate strike in March this year Xiye led 600 students from her school to protest.
Since then she has become one of the leaders of the school strike movement and organises climate strikes across the city.
She speaks out about climate issues at rallies and protests.
She was given a Spirit of the United Nations award in 2018 for her work on climate change.
News