FSARS Abducted, Threatened To Parade Us As Cultists, Fraudsters 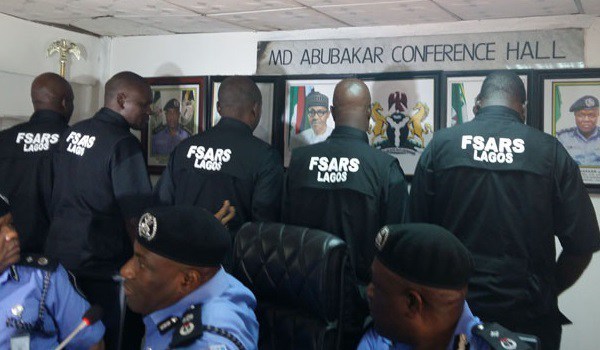 Osaretin Erins has taken to Instagram to narrate how Nigeria's security agents from the Federal Special Anti-Robbery Squad (FSARS) allegedly extorted N200,000 from him.


Eris, posting screenshots of bank transfers on his Instagram page claimed he was waylaid by the security operatives at the University of Suya, near Jendol Supermarket along Lagos-Abeokuta expressway. and asked to pay N500,000.
After some plea, the money demanded was reduced to N200,000.
His Instagram post said: “My name is Osaretin Erins. FSARS arrested me and my friend around 10 pm at the University of Suya in front of Jendol Supermarket along Lagos-Abeokuta Expressway. As we entered the vehicle, about eight heavily-armed men came out of a danfo bus with assault rifles and started to harass us and forcefully dragged my friend into their bus stationed in front of the supermarket making passers-by run for fear of being arrested too.
“After collecting our phones, they took us to an ATM and forced (asked) us to pay a ransom of N500,000. After much pleading, I realized two of the officers were from my state, Edo State. I pleaded with them but they put on deaf ears and insisted we follow them to Alagbon (annex of the Federal Criminal Investigation and Intelligence Department), that we are cultists and fraudsters, depriving me the access to contact my family for assistance.
"After much interrogation, they took me to an FCMB ATM and I was forced to empty my account balance. This is Nigeria where police have turned to midnight thieves.
“It’s really heart-breaking considering the fact that we are law-abiding citizens. Nigeria is heading towards a state of anarchy and turmoil if all this continues by FSARS and police. I am really heart-broken. Please use this medium to share this till it gets to the authority. The FSARS are from Area M in Idimu.”
However, the spokesperson for the Lagos State Police Command, Bala Elkana told SaharaReporters: "We have not received such a complaint. I will need details from the complainant to enable my office to investigate."
News