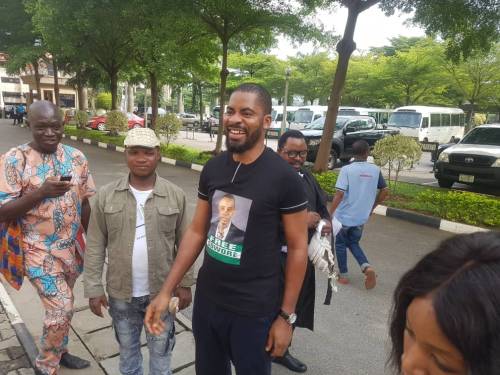 Supporters of human rights activist and pro-democracy campaigner, Omoyele Sowore, have once again condemned the President Muhammadu Buhari regime and corruption in the judiciary.
Their condemnation came on the heels of Department of State Services' arraignment of Sowore at a federal high court sitting in Abuja, today.

Rights activist Deji Adeyanju, who spoke with SaharaReporters, said he did not expect a good outcome from the arraignment because of the corruption in the judiciary.
He said, "We do not expect any good outcome because this is the federal government of impunity. Sowore is a modern-day hero. He has not said he will form a parallel government. So, I do not understand why such a person will be charged with treasonable felony."
He added that the arraignment was a tactic to delay justice in the matter.
"We are here to witness the abuse of court processes. They have run out to ideas to continue detaining him so we are not surprised by the tactics. What crime did Sowore commit? The charges are baseless."
Dr. Chidi Omogobuta, governorship candidate of the African Action Congress (AAC) in the 2019 general elections in Imo State, said she was in Abuja to show solidarity.
"I am here to support Sowore because what is going on is very disgusting. His detention is strong evidence of lack of democracy in Nigeria. This is a case that is dead on arrival. I want to use this opportunity to call on the youths to wake up and smell the coffee and support a freedom fighter," she said.
Features News