Falana To Judge: Order Sowore's Release, I'll Produce Him If You Need Him 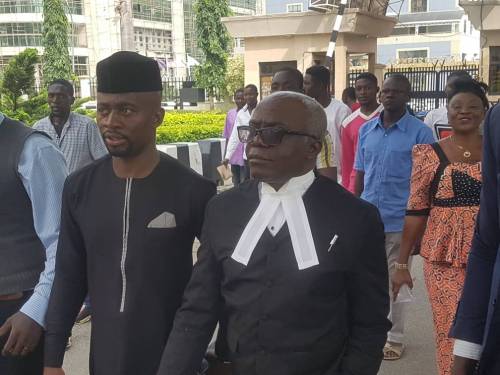 The human right lawyer, Femi Falana, has told a federal high court sitting in Abuja to order the release of Omoyele Sowore, promising to produce him in court in future hearings.


Falana argued that there was no basis for keeping him in detention since the order of 45 days granted to the Department of State Services (DSS) had expired and there was no application for extension.
Falana said, "Since the order has expired and l therefore urge the court to make a consequential order and release him. If the court wants him, I will produce him."
He told the court that Sowore could not be held in anticipation since there was no fresh order to that effect.
He argued that information attached to the exhibit by the Attorney General of Federation could not metamorphose into a remand order.
Falana submitted that the applicant (DSS) lacked the competence to ask for the detention of Sowore. That the fact must be before the court.
By virtue of section 40 of Terrorism Prevention Act stated that the State Security Service is not one of the security agents empowered to arrest or detain anybody.
Section 1 of National Security Act created the State Security Service  and not the DSS.
Falana, said the DSS lawyer was misleading the court by saying that treasonable felony was a capital offence.
Citing MKO Abiola Vs FRN 1995, Falana argued that then presidential candidate was granted bail after he was charged with treasonable felony.
The prosecution counsel, G.O Agbadua, while moving an application on the secret police said it was filing the application in the interest of "justice and national security".
News