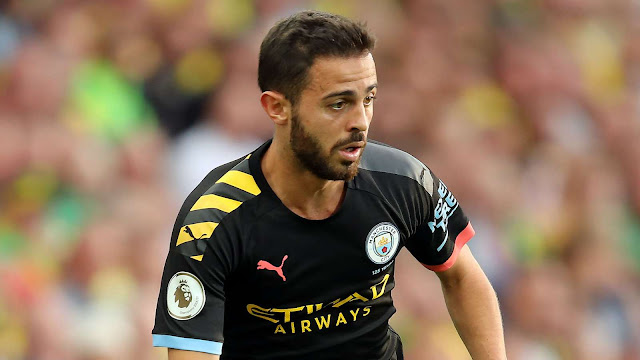 
Bernardo Silva tweeted a photo of Mendy as a child alongside a dated image from Spanish confectionary 'Conguitos' that has been condemned for its racist connotations, with the caption: "Guess who?"
Mendy did not appear to take offence, replying with laughing emojis and a message saying: "1-0 for you will see", but other Twitter users were quick to point out the racist implications of Bernardo Silva's post.
The Portugal international deleted the entry before commenting: "Can't even joke with a friend these days…You guys…"
However, the FA will look into the tweet and the City midfielder could face punishment.
The controversy comes during a week that representatives from the Premier League, the EFL and the FA met with Twitter to discuss the racist abuse that players including Marcus Rashford, Paul Pogba and Yakou Meite suffered in recent months.
Bernardo Silva's post came less than 24 hours after he scored a hat-trick in City's 8-0 victory over Watford, which saw Mendy make his first Premier League start since April.
"We were unbelievable in the first 30 minutes, scored lots of goals and had control," the midfielder told BBC Radio 5 Live after the game.
"After the Norwich defeat, it was great to give our fans the result and the performance.
"We aimed to keep it going in the second half. We didn't want them to hurt us or score past us.
"Football is a hard game. I've won 8-0 today but I've lost plenty of times by four or five goals. You just have to keep going so I wished the Watford players well."
City are back in action on Tuesday when they travel to Preston for the third round of the Carabao Cup.
Goodison Park then plays host to their next Premier League clash against Everton next Saturday, with City hoping for a positive result that will begin to narrow the five-point gap between them and leaders Liverpool.
Sports