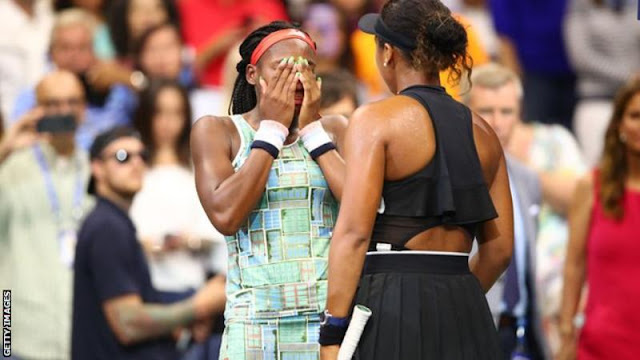 The defending champion consoled 15-year-old American Coco Gauff after beating her 6-3 6-0 in the third round of the US Open.


"She was crying, she won. I was crying. Everybody was crying!" said Gauff. "I didn't know why she was crying. I was like, 'you won the match!'"
It was not the first time Osaka has shown compassion in victory and after a heart-warming embrace at the net, she invited a tearful Gauff to speak to the crowd in a post-match interview.
"I was wanting to leave the court because I'm not the type of person who wants to cry in front of everyone. I didn't want to take that moment away from her, as well," said Gauff, competing in only her second Grand Slam singles main draw.
"She told me it's better than crying in the shower. She convinced me multiple times to stay. I kept saying no. Finally I said, OK, I'll do it. Because I didn't know what to do.
"I'm happy that she kind of convinced me to do it because, I mean, I'm not used to crying in front of everyone."
Osaka, 21, was holding back tears herself when she then spoke directly to Gauff's box, before apologising for playing so well.
"You guys raised an amazing player," said the Japanese world number one. "I used to see you guys training in the same place as us. The both of us made it and are working as hard as we can. I think this is the most focused I have been since Australia.
Turning back to Gauff, she added: "I am sorry for playing you in this mentality. It was super fun!"
Osaka later told a news conference: "It was kind of instinctive because when I shook her hand, I saw that she was kind of tearing up a little. Then it reminded me how young she was.
"I was just thinking it would be nice for her to address the people that came and watched her play. They were cheering for her."
Gauff said she had not expected that reaction from Osaka.
"I'm glad that I was able to experience that moment," she said. "I'm glad the crowd was kind of helping me and her.
"For me a definition of an athlete is someone who treats you as their worst enemy on the court but after they treat you like you're their best friend. That's what she did."

Tearful - but a contrast to last year

Japanese top seed Osaka announced herself to the world when she won the US Open last year after an angry Serena Williams accused the umpire of being a "thief" in some of the most dramatic scenes at a Grand Slam final.
Williams was given a game penalty for her outburst, which followed racquet smashing and another code violation as Osaka won 6-2 6-4.
"I'm sorry it had to end like this," a crying Osaka said during the trophy presentation.
Fast-forward 12 months and Osaka was once again up against the home favourite on Arthur Ashe. But this time the tears were different.
Osaka, though still only 21, was the senior - showing grace and maturity as she offered advice and comfort to Gauff - but could not hide her emotions when speaking to the teenager's family.
And remaining humble, Osaka laughed when it was suggested she was a "mentor" before hugging Gauff as the American left the court.
It was a moment which American 11th seed Sloane Stephens said is "what tennis should be about".

'Proud to have Osaka as number one'