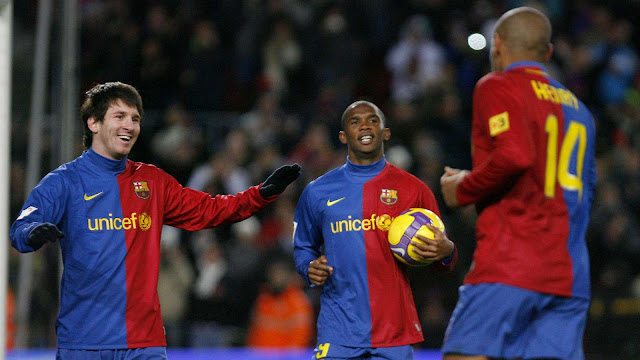 
Eto'o took to social media on Friday to make a low-key announcement of his retirement from the playing scene following an illustrious 22-year career which started in 1997 at Real Madrid.
The 38-year-old played in Spain with Real Madrid, Leganes, Mallorca, Espanyol and Barcelona before travelling to Italy where he featured for Inter Milan and Sampdoria. He also had stints in England with Chelsea and Everton. In Turkey he played for Anzhi Makhachkala, Antalyaspor and Konyaspor.
During his playing career, Eto'o won several team and individual laurels including three Champions League titles, four African Footballer of the Year awards and three La Liga titles, among other awards.
While many players congratulated Eto'o for his success on the field, Messi, particularly, joked the Cameroon legend would reach the 40-year mark before hanging up his boots.

Sunday Oliseh ✔@SundayOOliseh
Definitely one of the Best players ,if not the best to Come out Of Africa. Congratulations Samuel on a legendary Career. Now the real life starts

The legendary Samuel Eto'o announces his retirement from football

19 people are talking about this
"Have you decided to stop, Samu? I thought you would reach 40 at least... All the luck in the world in what you want to do from now on, genius," Messi wrote on Instagram.
"Congratulations for this great career Samuel Eto'o and very good continuation for the new challenges that await you... Africa is very proud of one of its greatest ambassadors," Drogba wrote.
"Thank you for all brother. It has been a pleasure to share team with you. Good luck in this new stage," Puyol wrote on Instagram.
"Soccer will miss you on the grass, brother. But I know you have a lot to contribute... Soccer needs you always friend... You've been very big as a player and I'm sure you will do it in everything that comes. Good luck in the new stage of your life, brother," Deco wrote.
Sports