Erdogan hosts Putin and Rouhani for new round of Syria talks 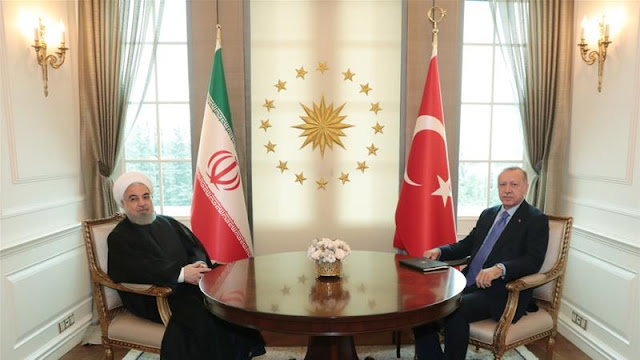 Turkey's president is set to host his Russian and Iranian counterparts in Ankara to discuss developments in war-torn Syria, where Moscow-backed government forces push on with an offensive to retake Idlib, the rebels' last major stronghold.


Recep Tayyip Erdogan, Vladimir Putin and Hassan Rouhani are expected to hold one-on-one meetings before Monday's summit on the Syrian conflict, their fifth since 2017. Later, they will speak to reporters at a closing news conference with a view to presenting a joint declaration.
While Iran and Russia have been staunch supporters of Syrian President Bashar al-Assad, helping him regain control of most of the territory lost in the long-running war, Turkey has supported different rebel factions.
With al-Assad's position looking increasingly secure, Ankara's priority has shifted to preventing a mass influx of refugees from Idlib in Syria's northwest.
Al Jazeera's Jamal El Shayyal, reporting from Ankara, said each country has its "own specific interests, but also concerns".
For Turkey, the issue of Syrian refugees has been "making the headlines" more often, Shayyal said.
"It has become part of the domestic political discourse," he said.
And like Russia, Iran "spent a lot of money and ... resources" on supporting Assad in Syria, Shayyal added.
Turkey is also concerned by the steady advance of Syrian forces into the region, backed by Russian airpower, despite a series of fragile ceasefire agreements.
Turkey has 12 observation posts in Idlib to enforce a buffer zone agreement struck a year ago with Russia to prevent a full-scale Syrian offensive and to quell fears of a humanitarian catastrophe. But the posts look increasingly threatened, with one of them cut off from the rest of Idlib when Syrian forces advanced last month.
Last month, Syrian troops encircled rebels and a Turkish post, in a move Ankara said threatened its national security. Shortly after, Erdogan and Putin agreed during talks in Moscow to "normalise" the situation in the region, even as the Turkish president warned that any Syrian government attack on the posts would draw retaliation from his country's forces.
However, attacks continued despite the two leaders forging seemingly closer ties.
"A large number of terrorists are still present in this zone ... and fighters continue to fire on the positions of government forces," Kremlin adviser Yuri Ushakov said on Friday.

In late April, Syrian forces, backed by Russia since 2015, began an offensive in the strategic northwest region, which includes a key highway connecting the capital, Damascus, with the northern city of Aleppo.
Russian air raids have continued in the region, home to about three million people, despite the latest ceasefire between Ankara and Moscow on August 31.
The United Nations says at least 500,000 people have amassed near the border with Turkey, many of whom are already internally-displaced from areas previously captured by forces loyal to al-Assad.
The Turkish presidency said the leaders on Monday would discuss the latest developments in Syria as well as "ensuring the necessary conditions for the voluntary return of refugees and discussing the joint step to be taken in the period ahead with the aim of achieving a lasting political solution".
Erdogan previously warned his country may reopen the route for refugees and migrants into Europe if it does not receive adequate international support to enable it to cope with the millions of refugees in Turkey.
He also said that Ankara plans to resettle one million Syrian refugees in northeast Syria, where Turkey and the United States are cooperating to form a so-called "safe zone".
Meanwhile, Moscow is eager to see progress on establishing a constitutional committee to oversee the next stage of the political settlement in Syria.
That would give Putin a political win to add to its military victories, said Dareen Khalifa, senior Syria analyst at International Crisis Group, adding that expectations should remain low.
Even if they could agree on who will form the committee, "this leaves a crux of issues unaddressed for the future of the political process including the regime's ability and willingness to undertake any kind of political reform," Khalifa told AFP news agency.
News