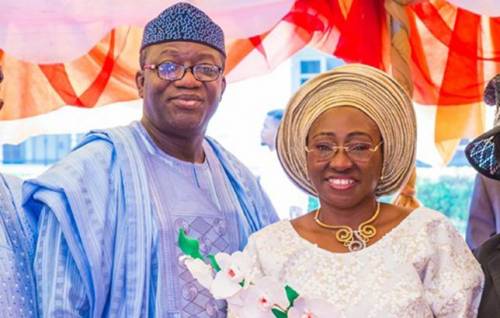 The National Association of Nigerian Students (NANS) has asked thefederal government to set up a panel to probe the killing of twostudents of the Federal University of Oye-Ekiti, Ekiti State by police
officers attached to Mrs. Bisi Fayemi, wife of Ekiti State Governor,Kayode Fayemi.The police had opened fire on protesting students, killed two of themas the students stopped the convoy of the first lady during a tour.Reacting to the killing of their colleagues, NANS accused the firstlady and Governor Fayemi of denying the truth of the matter andblaming the students for how the peaceful protest turned bloody.NANS PRO, Comrade Adeyemi Azeez, said: “We, however, call on thefederal government to probe this killing of our students in Ekiti asthis can best be described as a ‘state-planned assassination'.“Even when the rich oppress the poor in Nigeria, it is not done in theopen but the reverse was the case of Mrs. Fayemi who threw twofamilies into sorrow and gnashing of teeth without remorse.“And against the expectation of mothers, Erelu as fondly called, couldstill lie even when the lives of two promising young Nigerians wereinvolved.“This pitiable situation which has been on between the rich and thepoor might graduate into a revolt of the poor in this country.“Despite our respect for Governor Fayemi, his wife has successfullyturned our backs against each other as we would not toy with the lifeof any of our students.”The students also knocked the governor for keeping mute since the newsof the killings of the students broke.Azeez stated that the governor who is well respected by the nationalstudents’ body is losing their respect.He said: “We know that God almighty is the biggest judge and willdispense judgment as due to her.“You and your husband have the state powers and as a result should beable to restore normalcy to an uproar, that is why you were elected.“Her husband, who used to be one of our well-respected elders in NANS,is also gradually losing our respect as he has not said anything sincethis crisis started instead he is busy fighting for security votes.“If we have our way we would suggest that Ekiti state security vote beremoved since the governor has not been making judicious use of theones he has been collecting which is evident in his inability tosecure our students.”
Politics