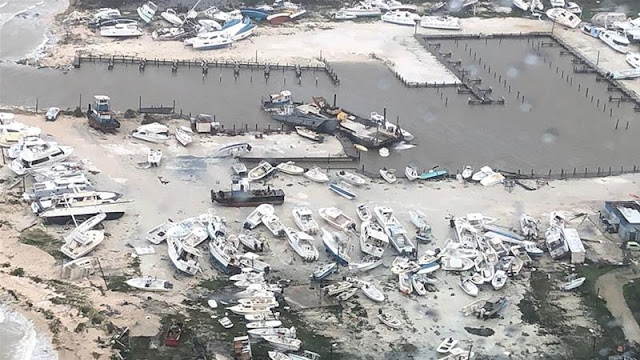 Survivors of Hurricane Dorian on Wednesday picked through the wreckage of homes ripped apart by fierce winds, struggled to fuel generators and queued for food after one of the most powerful Caribbean storms on record devastated parts of the Bahamas.


The most damaging storm to strike the island nation, Dorian killed at least 20 people, according to Bahamas Health Minister Duane Sands.
But the toll was certain to rise as the scope of the destruction becomes more clear, with aerial video of the Abaco Islands in the northern Bahamas showing widespread devastation.
Mark Lowcock, the United Nations under-secretary general for humanitarian affairs, said in a conference call with reporters that he expected the death toll to rise significantly.
In the United States, South Carolina was preparing for a record storm surge and major flooding with the potential for over a metre of rain in places when Dorian hits the coast on Thursday or Friday.
Dozens of people in the Bahamas took to Facebook to search for missing loved ones, and aid agencies estimated that tens of thousands of people of the Bahamas population of 400,000 would need food and other support. 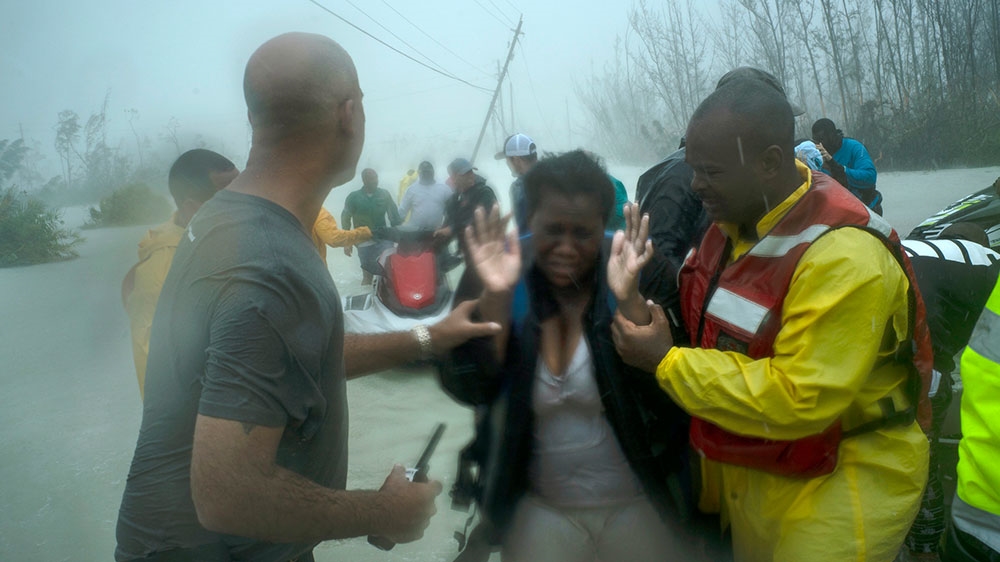 Volunteers rescue several families that arrived on small boats from the rising waters of Hurricane Dorian, near the Causarina bridge in Freeport, Grand Bahama [Ramon Espinosa/AP Photo]
"We are in the midst of one of the greatest national crises in our country's history," Bahamas Prime Minister Hubert Minnis told a news conference.
"We can expect more deaths to be recorded. This is just preliminary information."
LaQuez Williams, a pastor at Jubilee Cathedral in Grand Bahama, who opened the church as a shelter for about 150 people, said he saw people on their rooftops seeking refuge.
"They were calling for help, but you could not go out to reach," Williams said. "It was very difficult because you felt helpless."
Aerial video of Great Abaco Island showed miles of flooded neighbourhoods littered with upturned boats and shipping containers scattered like toys. Many buildings had walls or roofs partly ripped off.
A Reuters photographer surveying the damage on Grand Bahama island said many hangars at Freeport airport and several aircraft appeared to be severely damaged.

'Something no one could prepare for'

A single Facebook post by media outlet Our News Bahamas seeking the names of missing people had 2,000 comments listing lost family members since it went live on Tuesday, although some of the comments were also about loved ones being found.
Janith Mullings, 66, from Freeport, Grand Bahama, said she had been through hurricanes all her life but had never seen anything like Dorian.
"We've never had hurricanes in none of our islands that have experienced the ocean rising like it did. The ocean was something no one could prepare for," she said. 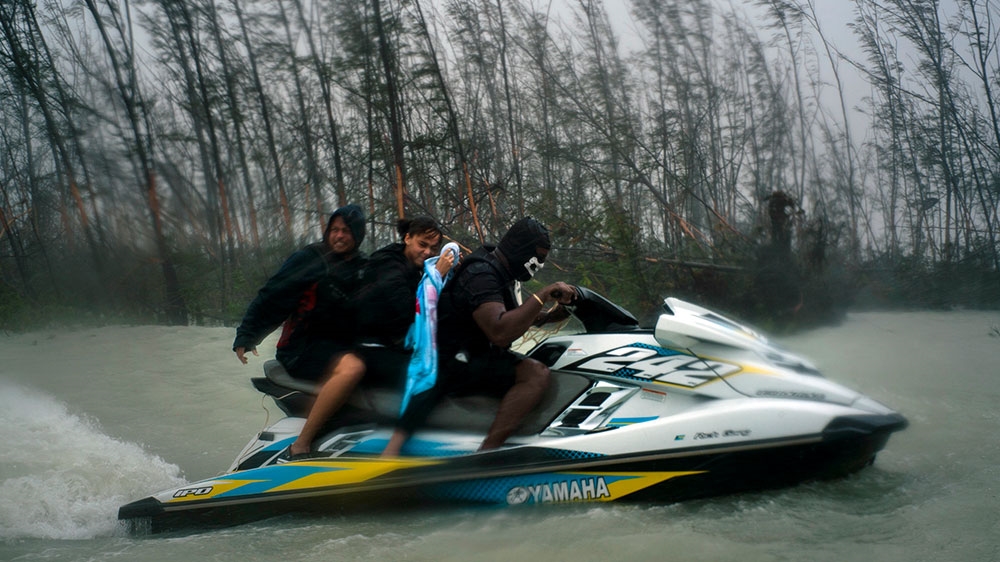 A woman who was trapped by flood waters during Hurricane Dorian is transported out of the area by volunteers on a jet ski near the Causarina bridge in Freeport, Grand Bahama [Ramon Espinosa/AP Photo]
A massive relief effort was under way with volunteers ferrying supplies to the islands in a flotilla of small boats.
As many as 13,000 homes in the Bahamas may have been destroyed or severely damaged, the International Federation of Red Cross and Red Crescent Societies said.
"It's heartbreaking ...," said Caroline Turnquest, director general of Bahamas Red Cross. "We know from what we've been seeing and hearing, that this one will require the help of all the persons."
Food may be required for 14,500 people in the Abaco Islands and for 45,700 people in Grand Bahama, the UN World Food Programme said.
US Coast Guard and Customs and Border Protection personnel have airlifted 61 people from the northern Bahamas to the capital Nassau over two days, the US Embassy said.

Meanwhile, Dorian pushed its way northward off the Florida shoreline. The hurricane was about 240km south of Charleston at 5pm (21:00GMT), as a Category 2 storm on the five-step Saffir-Simpson intensity scale, the Miami-based National Hurricane Center (NHC) said.
But it could strengthen again to a Category 4 in the next 24 hours "because it is hovering over warm waters, a key ingredient in hurricane intensity, NHC meteorologist Lance Wood said.
The NHC issued a storm surge warning that covered the whole length of the coasts of Georgia, South Carolina and North Carolina and extended to Hampton Roads in Virginia. 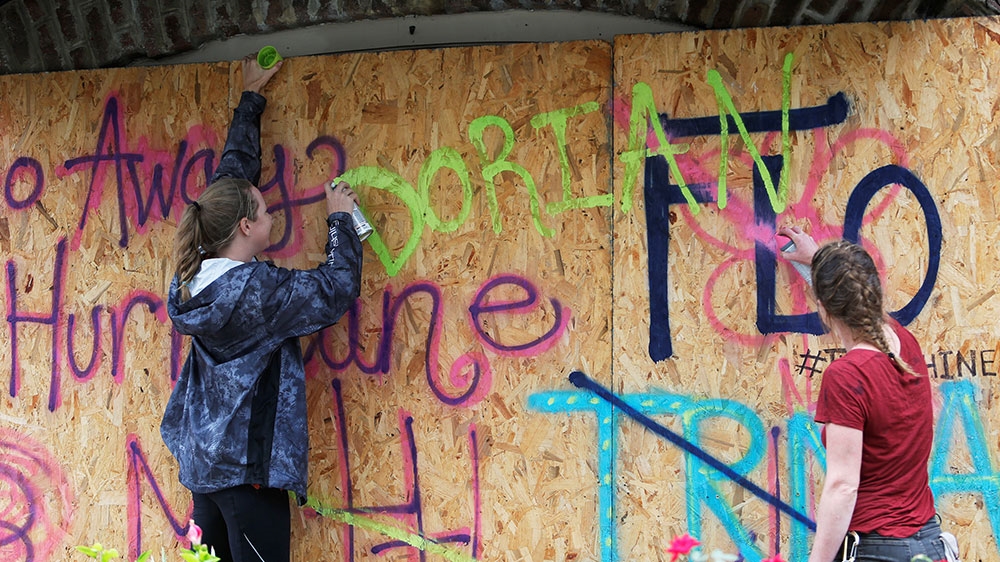 Coreyanna Moore of Charleston, South Carolina, adds the latest named storm to hurricane boards ahead of the arrival of Hurricane Dorian [Randall Hill/Reuters]
The NHC warned that Dorian would move near or over the coast of South or North Carolina on Thursday or Friday. More than 2.2 million people in Florida, Georgia, North Carolina and South Carolina have been ordered to evacuate.
Florida avoided a direct hit from Dorian.
"We certainly got lucky in Florida, and now if we could get lucky in Georgia, in North Carolina, in South Carolina," President Donald Trump told reporters in the Oval Office.
Trump said the United States was sending supplies to the Bahamas including materials that had been originally intended for Dorian victims in Florida.
News