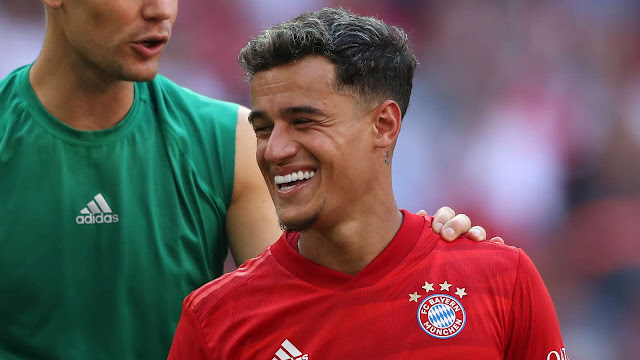 Bayern Munich are among the favourites to win the Champions League this season following the arrival of Philippe Coutinho, Manchester City goalkeeper Ederson believes.


The 27-year-old joined the German giants from Barcelona on loan for the season, with Bayern reserving an option to buy him outright at the end of the campaign for around €120 million (£110m/$133m).
Although the Brazil international failed to seal a regular spot in the Barcelona team in the 18 months following his move from Liverpool, he has made an impact in Bavaria after just two Bundesliga appearances to earn the admiration of his team-mates.
Star striker Robert Lewandowski has tipped the midfielder and winger to become one of their most important players this term, saying: "He can be the key in important games, especially in the Champions League. He can give us that something special. [Coutinho's presence] makes us more unpredictable, which makes us more dangerous."
And Coutinho's fellow Brazil star Ederson is in agreement with Lewandowski, as he believes a "great" team has been made even stronger and could go on to win a first Champions League title since 2013.
"Bayern is always a great team. Now with Coutinho they definitely belong among the title favourites for the Champions League," Ederson told  Bild   while on international duty this week.
"Coutinho is a brilliant player. Unfortunately, it did not go as well for him in Barcelona as it was in Liverpool.
"At Bayern he can now show his football again and be really happy again."
Meanwhile, Brazil boss Tite is confident Coutinho can keep up the good work in the German top-flight: "He has played twice in the Bundesliga. I hope it will continue and help him to realise and develop his full potential."
And Coutinho himself is confident of improving as a player in Munich, as he hopes to thrive in a team full of strong players.
"There are a lot of good players, top players and great players [here]," he said after his first start with the club - a 6-1 win over Mainz.
"I'm really happy to be here so that I can learn from them and get better."
Sports