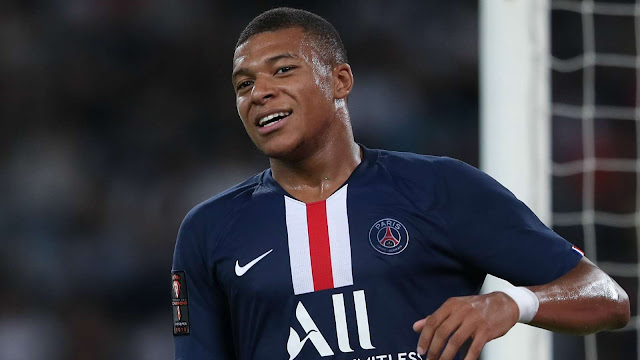 Juventus are reportedly keen on the signing of Bayer Leverkusen youngster Kai Havertz, according to Calciomeracto.


The 20-year-old attacking midfielder has been of interest to Bayern Munich and Borussia Dortmund for some time, and has also been linked to Arsenal after comparisons to Mesut Ozil were made.
However, Juventus are set to meet Leverkusen in the group stages of the Champions League and have planned to hold talks with the Bundesliga outfit.
Getty

38 minutes ago 13:30
Rhian Brewster has suggested that Callum Hudson-Odoi should join Liverpool via social media.
The Reds youngster added "at Liverpool" to a comment on a video Hudson-Odoi posted from Chelsea loanee Trevoh Chalobah telling the winger to sign a new deal with the Blues.
Hudson-Odoi's contract expires at the end of the season and he has yet to pen new terms at Stamford Bridge after Bayern Munich showed firm interest in January.

1 hour ago 13:00
Los Blancos have identified the young Frenchman as their main priority ahead of next season.
Real Madrid have reportedly made Kylian Mbappe their top transfer target for next summer, according to the Daily Mail.
In the wake of their failure to land Neymar ahead of this season, Zinedine Zidane has turned his attention to the Brazilian's younger team-mate at Paris Saint-Germain.
The 20-year-old hit a whopping 39 goals from 43 appearances across all competitions last term, adding a further 17 assists.
Getty

1 hour ago 12:30
Unai Emery wanted Eddie Nketiah to remain at Arsenal instead of joining Leeds United on loan, the young striker told the Daily Mail.
The Gunners boss had plans to use the forward this season but the player felt his development was best served by going out on loan to get regular playing time.
His time with the Championship club has been a success thus far, having scored three goals from just 226 minutes of football between the Championship and the EFL Cup.
Twitter/Leeds United

2 hours ago 12:00
Chelsea are reportedly set to offer Emerson fresh terms at the club, according to Gazzetta dello Sport.
The left-back's current contract expires in 2022, but the Blues hierarchy are considering handing the Brazilian a one-year extension and a pay rise.
The 25-year-old has taken Marcos Alonso's place on the left side of the defence as Chelsea have returned to a back four since the departure of Antonio Conte.
Getty

2 hours ago 11:30
Lyon midfielder Jeff Reine-Adelaide has insisted that leaving Arsenal to further his career at Angers was a good choice.
The Frenchman joined the Gunners from Lens in 2015 but found first-team opportunities limited, making just eight appearances for the senior team, all of which came in either the FA Cup or the Carabao Cup.

In the summer of 2018, new Arsenal boss Unai Emery allowed him to return to his homeland with Angers. Following an impressive season, he has been snapped up by Lyon.
Read the full story right here on Goal!
Getty

3 hours ago 11:00
Paulo Dybala has met with Juventus legend Alessandro del Piero for advice on how to resurrect his career in Turin, according to Tuttosport.
The Argentine was close to moves to both Manchester United and Tottenham Hotspur but saw both collapse, while he was also linked with Inter and Paris Saint-Germain but ultimately stayed put.
He has now found himself on the fringes of the first-team, with Maurizio Sarri benching him in favour of Douglas Costa and Gonzalo Higuain so far this season.

3 hours ago 10:30
Dani Olmo has hit out at Dinamo Zagreb for blocking his dream Premier League move this summer, according to Sportske Novosti.
The Spaniard was the subject of a £22.5m (€24.8m/$27.6m) bid from Wolves, but with rumours of interest from Manchester United and Tottenham Hotspur, Zagreb held out for a bigger fee.
Ultimately, no other bids arrived for the 21-year-old attacking midfielder and he has lashed out at his current employers for not accepting Wolves' bid, suggesting their asking price for him was too high.

4 hours ago 10:00
Barcelona president Josep Maria Bartomeu has claimed he is 'relaxed' about the future of star player Lionel Messi, speaking to Barcelona's official website.
He confirmed that a clause exists that would allow the Argentine to leave the Catalan giants for free at the end of this season, but insisted he was not worried about it.
Messi has scored 603 goals and recorded 242 assists in 687 appearances for Barcelona across all competitions in his career.
Getty

4 hours ago 09:30
Olivier Giroud is considering his options ahead of the expiry of his Chelsea contract at the end of the season, including a potential switch to MLS, according to RMC Sport.
The Frenchman was handed a one-year extension last summer but could be allowed to leave for free in 2020.
At the age of 32, the striker is open to a new challenge and an American adventure is thought to be of interest to him.

5 hours ago 09:00
Juventus head coach Maurizio Sarri is keeping his eye on the best Premier League talent with just a year left on their contracts, according to the Daily Star.
The former Chelsea boss has highlighted Manchester United goalkeper David de Gea as well as Tottenham pair Toby Alderweireld and Christian Eriksen.
The Bianconeri have shown an aptitude for landing talented free agents in the past, having acquired Andrea Pirlo, Paul Pogba, Aaron Ramsey and Adrien Rabiot - among others - for nothing.

5 hours ago 08:30
Bournemouth are set to make £1m if Tyrone Mings earns an England cap, according to the Birmingham Mail.
An international call-up was one of the clauses inserted into his transfer when he joined Aston Villa permanently in the summer.
If Gareth Southgate fields Mings at any point during this international break or in the future, Villa will be forced to stump up additional cash for their new central defender.

6 hours ago 08:00
The Red Devils want their record signing to commit his long-term future to the club.
Manchester United have contacted Paul Poba's agent - Mino Raiola - over a new contract for the midfielder, according to L'Equipe.
The Frenchman had appeared to be on his way out but has remained at Old Trafford and the Red Devils hierarchy are hoping to convince him to stay long-term.
The 26-year-old's current deal expires in the summer of 2021 and, if he does not sign, United may be forced to sell him at the end of the season in order to avoid losing him on a free transfer.
Getty Images

Trabzonspor pulled out of Amartey deal

6 hours ago 07:30
Trabzonspor reportedly pulled out of a late move for Leicester City's Daniel Amartey, according to Fotospor.
The midfielder - who can also play at right-back - was seen as an alternative to John Obi Mikel, who has struggled for form so far this season.
The Turkish outfit were keen to complete the deal but could not afford it, having handed free agent Daniel Sturridge a sizeable contract.

8 hours ago 05:37
Nashville has announced the signing of Randall Leal for the club's upcoming MLS roster.
The 22-year-old will join the club from Deportivo Saprissa for the club's first MLS season in 2020.

10 hours ago 03:22
The Seattle Sounders called up a pair of players from Tacoma Defiance on short-term deals for Saturday's match, the club announced.
International callups and injuries have forced the club's hand, and Nick Hinds and Shandon Hopeau​, two players from the club's USL affiliate, have been brought in to help fill the gap.

12 hours ago 01:59
Barcelona president Josep Maria Bartomeu says the La Liga champions won’t be making a renewed move for Neymar in the January transfer window, despite doing "everything possible" to sign him.
The Paris Saint-Germain forward was a target for Barca throughout the summer but, despite weeks of speculation, didn’t get his desired move, and now it seems his wait will be a long one.
"Neymar can't join Barca in January, and the Barca dressing room doesn't decide anything,” Bartomeu told Barca TV.
Read the full story on Goal

Bertolacci has options in Italy and abroad

13 hours ago 00:55
Andrea Bertolacci could sign for Serie A side Atalanta or Brazilian giants Flamengo, according to the Corriere dello Sport's Matteo Pedrosi.
The 28-year-old midfielder, who has five caps for the Italian national side, is currently without a club following the end of his contract at AC Milan.
He has previously also spent time with Roma, Lecce and Genoa.

13 hours ago 00:30
Former AC Milan forward Jeremy Menez wants to return to Serie A with Sampdoria, according to CalcioMercato.
The 32-year-old former France international is currently without a club after being released by Mexican side Club America.
Menez has reportedly been offered to Sampdoria, but owner Massimo Ferrero isn't totally convinced.
Victor Cruz

13 hours ago 00:14
Sameul Eto'o has seemingly called time on his glorious career.
The Barcelona and Inter legend wrote on his Instagram: "THE END😉 TOWARDS A NEW CHALLENGE ...Thank you all big love ❤️ adrenaline 💉💉💉💉💉💉"

Man City knocked back for Skriniar

14 hours ago 23:59
Guardiola wants defensive reinforcement in January
Manchester City are set to target Inter Milan centre-back Milan Skriniar in January after having their advances rejected in the summer window, report CalcioMercato.
City are facing a defensive crisis with Aymeric Laporte set for a lengthy spell on the sidelines. Pep Guardiola is thought to have wanted a new centre-back in the summer after the departure of Vincent Kompany, and is now expected to dip into the January market with Laporte out.
However, Inter aren't keen on the thought of losing the 24-year-old Slovakia international, who is set to play a key role this season under new manager Antonio Conte.

Progress made in Sacramento MLS deal

14 hours ago 23:45
Sacramento representatives and officials have agreed the framework of a deal which could see a Major League Soccer expansion franchise in the city in 2022, according to the Sacramento Bee.
Final details are now being put together, with Sacramento Republic FC President Ben Gumpert recently announcing that the process was near to completion.
A completed deal would see Sacramento become the 29th team in MLS.

14 hours ago 23:30
Burnley are set to test Middlesbrough's resolve with a £9 million ($11m) offer for 17-year-old defender Nathan Wood, according to The Sun.
Arsenal, Tottenham and Everton are also thought to be interested in the teenager, who became Boro's youngest-ever player last season.
New manager Jonathan Woodgate is keen to put faith in his youngsters this season, and the Championship side rejected an offer from Burnley over the summer.

14 hours ago 23:15
Christian Pulisic is one of a group of players set to return to their clubs before the USA's friendly with Uruguay next week, according to Yahoo Sports.
The 20-year-old is still bedding in at Chelsea following his move from Borussia Dortmund and coach Gregg Berhalter is keen to give his European-based stars some time off.
Alfredo Morales and Zack Steffen will return to Fortuna Dusseldorf, John Brooks to Wolfsburg and Sean Johnson is expected to head back to New York City. However, all five are available for the first game of the international break, against Mexico.
Getty Images

Valencia look to tie down Soler and Torres

15 hours ago 23:00
Valencia are aiming to tie down talented young duo Carlos Soler and Ferran Torres to new contracts, with SuperDeportes reporting that September could be a key month in negotiations.
Wingers Soler, 22, and Torres, 19, aren't currently locked to long-term deals and the club would prefer to get extensions done early rather than alert other teams to their potential availability.
Soler registered four goals and 11 assists last season, while Torres has played some part in all three of Valencia's league games so far this season.
Sports