Chicharito, Tecatito prove why they remain firmly in El Tri's picture in victory over USMNT 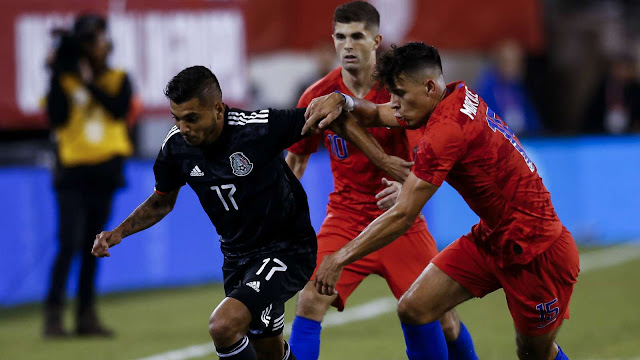 Raul Jimenez is the Mexico national team's starting No. 9.
He's earned the role with incredible form in the past 12 months, scoring goals regularly for both Wolves and El Tri. He'll start Tuesday against Argentina, along with most of Mexico's other presumptive starters, the No. 1s on the depth chart.


Even so, the competition is nipping at his heels. Javier "Chicharito" Hernandez and Javier "Tecatito" Corona put in impressive shifts in their first match for Mexico in months, a 3-0 victory over the United States that may have reopened the debate about who makes up Tata Martino's most dangerous attacking trident.
Martino seemed thrilled not only to have scored three goals, but to have them each come from different situations.
"Scoring three goals, having two or three more really obvious chances, scoring three goals especially at this level and in different ways, one because of really good build-up, one a product of our high pressing, the third a product of a counter-attack and quickly taking up space (is a positive,)" Martino said at his post-match news conference. "After that, it has to do with individual questions, the debut of Tecate and Hector (Herrera), Javier’s return after March, the consolidation of the squad that played the Gold Cup.
"Honestly, it’s a game that leaves us a lot of positive thoughts within what it is - a friendly match that we played well and won."
The positive vibes started with Corona. At Porto, the 26-year-old has been getting run-outs at right back, but Martino said before the game he still sees him as an out-and-out winger. It was easy to see why in the 21st minute, when he gave Sergino Dest a rude welcome to senior international football by dipping past him and sending in a cross. As he so often is, Chicharito was in the perfect spot in the box waiting to apply the finishing touch.

Tecatito has the skills to take players on one-on-one, and he's made defenders far more experienced than Dest look silly. U.S. coach Gregg Berhalter noted how how Corona stayed high and made life difficult for the Ajax youngster, with neither Dest nor the Americans' center backs able to rein him in.
Watch back to the start of the play, though, and you can see it was classic Chicharito in another way. Few forwards come as deep as Chicharito does to both apply pressure and serve as the link between the back line and the attack. On the opening goal, he starts deep and ends up on the right side where right back Jorge Sanchez plays the easy pass to the forward. Chicharito then finds Corona with a one-touch pass. Next, he floats laterally before making the run into the box to head it in.
Chicharito may be known for his play in the box, but he often gets involved in the build-up play as well. His chemistry with both Corona and with center back Hector Moreno has been the formula behind an absurd number of goals for Mexico in the last four years.
"The good thing is I was able to get on the scoreboard in my return to the national team," he told TV cameras after the game. "The team was good. I'm happy after so many months. We had chances, we played well and I was able to represent my country once again."
If wearing the crest is what's important to him, the new Sevilla signing may play a fascinating role as a supersub. Chicharito won't displace Jimenez for starting minutes in Mexico's biggest matches, but he's an excellent option to have not only to come off the bench and give Mexico another threat in a game its chasing but also in case Jimenez picks up a knock or simply is fatigued during a season in which he'll be helping Wolves not only in the Premier League but also as they look for continental glory in Europa League play.
Tecatito's case is slightly different. He plays a position Martino uses two of, and there's no obvious No. 2 winger on the depth chart behind Hirving Lozano. With Rodolfo Pizarro undergoing appendicitis, it's possible we see a front three of Lozano, Jimenez and Corona earlier than expected - or perhaps the manager will give a chance to a younger player like Uriel Antuna.
Either way, it certainly looks like El Tri's best attacking trident and the fans may see that trio in action together sooner rather than later.
Both Chicharito and Tecatito gave fans a reminder Friday. They haven't been around for a while, but in the big picture they haven't gone anywhere.
Sports