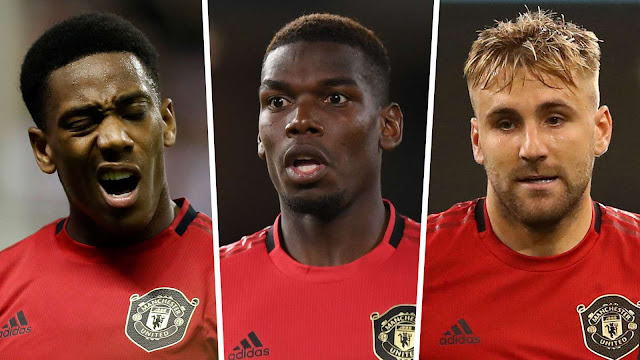 Ole Gunnar Solskjaer has confirmed that Anthony Martial, Paul Pogba and Luke Shaw will all miss Manchester United's trip to West Ham on Sunday, but he is hopeful Daniel James can still feature.


Pogba has been unavailable since sustaining an ankle injury in a 1-1 draw at Southampton on August 31, while Martial and Shaw have both been recovering from knocks suffered against Crystal Palace.
James, meanwhile, suffered an injury during last Saturday's 1-0 win over Leicester City, which forced him to miss the Europa League victory against Astana on Thursday.
When asked if Pogba and Martial would be fit enough to face West Ham on Sunday, Solskjaer told reporters: "Not really, no. They've not been training yet so I don't think so. [Luke] won't be ready.
"Daniel James? I don't know. He's not trained in the last few days. Hopefully, but not sure. We'll have a recovery day with everyone tomorrow and we'll see on Saturday."

United currently sit fourth in the Premier League table, having picked up eight points from a possible 15.
However, Solskjaer's men have not secured an away victory since beating Paris Saint-Germain in the Champions League on March 5.
The Red Devils' last domestic win on the road came against Crystal Palace on February 25, but Solskjaer insists he is not concerned by their away woes.
Despite having posted draws against Wolves and Southampton on their travels already this season, the United boss is adamant that his side should have earned maximum points in both matches and that there's nothing to worry about.
"Why should we coaches be concerned?" he said. "We're looking forward to things, looking for solutions. I've never been concerned about anything really. I don't walk around and worry about things. I'm looking at what we can do to improve. I've never been a worrier.
"I think we should've won at Southampton, I think we should've won the Wolverhampton one. Both should be wins. It's still the same size pitch, green with white lines, some fans. You've got to block out the mental part and play as you would in the park."
After their clash with the Hammers, United will turn their attention to a Carabao Cup third-round tie at home to Rochdale, before hosting Arsenal in the Premier League five days later.
Sports