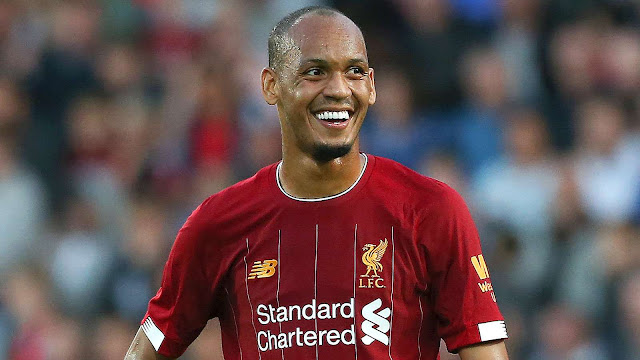 It was a moment to sum up a performance. To sum up a player.
About 10 minutes had elapsed at Stadio San Paolo when Fabian Ruiz, the Napoli midfielder, picked up possession inside his own half.


He had options, to his left and to his right. He had time to lift his head, to scan his surroundings and to make his choice. He had space. Or so he thought.
By the time Ruiz’s head was up, it was too late. The space was gone, eaten up by a red shirt and a telescopic leg. The tackle was firm but fair, timed to perfection. The ball was Liverpool’s.
Fabian, meet Fabinho. You don’t get time and space when he’s around.
It’s hard to be an unsung hero in this Liverpool team, given the way it has performed over the past two seasons, but the Brazilian’s rise to prominence at Anfield has been almost as stealthy as it has been swift.
In a losing cause, his performance against Napoli was a mighty one, a perfect fusion of strength and power, subtlety and class. The Champions League is the place for elite players, and Fabinho has elevated himself into that class, no question.
In Naples, nobody won more tackles than he did. Nobody regained possession more times for their side, and nobody lost the ball on fewer occasions. Of the players who started the game, only Andy Robertson had a better passing accuracy. Only Jordan Henderson attempted more passes in the opposition half.
“Excellent,” was the assessment of Jamie Carragher, the former Liverpool defender.
Carragher played with some outstanding midfielders during his 16-year Reds career, but how many of them had what Fabinho has, that blend of defensive instinct, tactical discipline and attacking quality? Probably only the great Steven Gerrard.
“He’s like Inspector Gadget,” says Virgil van Dijk, referring to his team-mate’s ability to pinch possession time and time again. “He has these legs that go everywhere!”

Pep Lijnders, Liverpool’s assistant manager, has another nickname for him. “The Lighthouse,” he calls him.
“There’s a saying in Portuguese,” Lijnders told  Goal back in February. “‘ A bola sempre sai rodada ’. It means ‘The ball always goes out round’ and with a player like Fabinho in the middle, you can see that.
"His timing, his vision, his calmness – it gives another dimension to our midfield play.”
Liverpool have searched for a long time for a No.6 with such qualities.
The likes of Lucas Leiva, Emre Can, Jordan Henderson and Gini Wijnaldum all had a go, while Gerrard excelled there for a season or so under Brendan Rodgers. But not since the departure of Javier Mascherano nine years ago have the Reds had a truly world class, specialist holding midfielder.
Mascherano was a brilliant player for Liverpool, a fierce competitor and a wonderful footballer. Alongside Xabi Alonso, and with the younger version of Gerrard further forward, the Argentine formed what Kopites used to call “the best midfield in the world” under Rafa Benitez in the late-2000s.
It was a hell of a team, to be fair – though it never won a trophy. And where Mascherano scurried and tackled, and Alonso set the tempo of the game with his forward passing, Fabinho seems capable of doing it all.
He has height, presence, times his tackles, wins headers, passes the ball forwards and reads the game superbly. He's a mixture of Alonso and Mascherano, and that is some compliment.
Liverpool’s midfield is the most rotate-able part of their team at the moment, but the former Monaco man is rarely absent. For Jurgen Klopp, he is indispensable.
At Chelsea on Sunday, he will make his 50th Liverpool appearance. On Wednesday, it was the anniversary of his first – a late, late cameo at Anfield against PSG, when he was being eased in gently following his £40 million ($50m) summer transfer.

Fabinho signed in July but did not start a league game until late October, by which time he had already – bizarrely – been linked with a return to France.
How silly those rumours look now that he is a European champion, top of the Premier League, a lynchpin for one of the world’s finest club teams. Even PSG couldn’t afford him now.
Klopp, typically, still believes there is more to come from a player who doesn’t turn 26 until next month. He believes he can get fitter, that he can have an even greater influence in an attacking sense.
If there is a criticism, it is that Liverpool’s midfield can sometimes lose control of games for 10- or 15-minute spells, particularly away from home.
Sunday will be a test. Chelsea’s youngsters, energetic and naïve under Frank Lampard, would love to bloody the league leaders’ nose. After the disappointment in Naples, a trip to Stamford Bridge will test the Reds’ resolve.
Around this time last year, the sides met twice in the space of four days, Chelsea winning in the Carabao Cup at Anfield before Liverpool, thanks to Daniel Sturridge’s memorable late equaliser, snatched a point in the league down in London.
Fabinho started the cup game – his first start for the club, in fact – but was unused in the league clash.
How times have changed.
He’ll be one of the first names on Klopp’s teamsheet on Sunday, you can be sure of that.
Sports