#BBNaija Stars Khloe & K. Brule Question their Disqualification from the Show in 2018 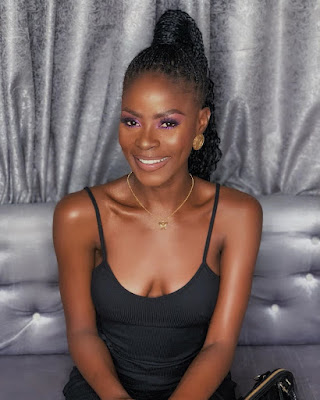 Khloe in a new Instagram post is asking Big Brother Naija reality show organisers why she and her strategic partner in the show K. Brule were disqualified from the show in 2018.


They were disqualified after they (as a team) got 3 strikes. Khloe was later voted back into the house alongside Anto, but they were evicted later on.
Khloe wrote:
Dear BIG BROTHER NIGERIA for over a year now I kept asking myself what happened that day me and my sweet @k.brule was disqualified and I still can’t get a perfect answer but yah all claim it’s big brother rules BUT even in my season a lot more happened that’s 100 times worse than that night but nothing was done, Now this season, things has been happening and nothing was done as well.
I just want to know what This show really stand for now cos I can show what I signed,what it says and the rules BUT yah all will say “ it’s big brother house and his rules “ lol
This is called CLOUT cos of voting money. But who am I to say anything ? I’m just Khloe the scapegoat ahahahahahaha
On this day I wanna say @k.brule I’m sorry I allowed us to be a scapegoat and I love you with all my heart ❤️ pls forgive me 🙏
@bittobryan thanks for stating the obvious cos now I can forgive myself and rest cos werey ni everybody ..
I know a lot of people will testify to me always saying “it’s a reality show and that means showing your real self” but that would have been justified if I wasn’t disqualified for things that was later done”even more “ and no action was taken…
Let no one come with the “ you were voted back “ we all know what that was for and what was achieved @antolecky sorry I tried to say it’s fair on us even though I knew it’s called “Used”
Let me stop writing before I spill the tea #DropPen💃🏾 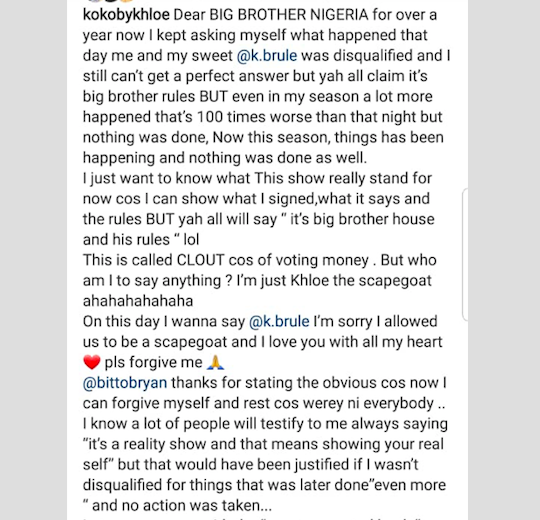 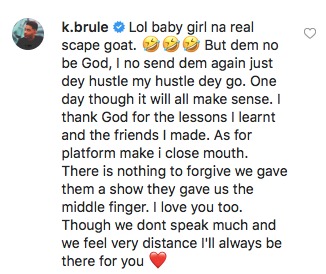