Barcelona ordered to pay just €300 as punishment for Griezmann transfer 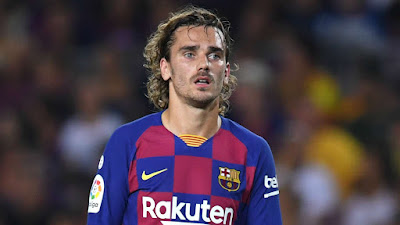 Barcelona have been fined just €300 by the Royal Spanish Football Federation (RFEF) for their actions in the signing of Atletico Madrid forward Antione Griezmann.


Atletico claim that Barcelona reached an agreement to sign the France international when his release clause stood at €200 million (£178m/$221m).
Griezmann ended up completing a  €120m (£107m/$134m) move to Camp Nou on July 12, with his buy-out clause reduced at the start of the same month.
And Barca have now been sanctioned by the RFEF on Thursday, with the club now due to pay a v300 fine for a breach of rules.
It had been suggested that the Spanish champions may be forced to play a fixture behind closed doors, but no ban on supporters has been issued.
The RFEF have released an official statement, which reads: "It is evident that the amount of economic sanction does not bear any proportion to the importance of the facts that have given rise to this file.
"Taking into account the economic capacity of the club and the amount of the economic operation, this committee is aware that the payment of €300, beyond its merely symbolic nature (the fine is imposed because the issued club has been considered the author of a disciplinary infraction), will not contribute to the sanctioned club in particular and, probably, other clubs that may be in the same situation in the future, adapt their behaviour to what is required by regulation.
"However, this is not a sufficient reason for this committee to opt for the imposition of a sanction - the closing of the stadium by a party - which, as stated, seems to be intended for infractions of another nature."
Atletico have ultimately missed out on the €80m ($87m/£71m) they feel they are owed, but club boss Diego Simeone will likely be unaffected by the news.
The Argentine stated that he "was not interested" in any new findings regarding Griezmann's transfer ahead of a clash with Celta Vigo on Saturday.
Spanish publication El Mundo lifted the lid on Barca's alleged wrong-doings, claiming they had access to emails which proved that the club finalised an agreement with Griezmann back in March.
The 28-year-old has settled in quickly at Camp Nou, netting three goals in his first six La Liga appearances.
Greizmann will likely retain his place in Ernesto Valverde's line up for a trip to Getafe on Saturday, before Barca prepare for a Champions League clash against Inter four days later.
Sports