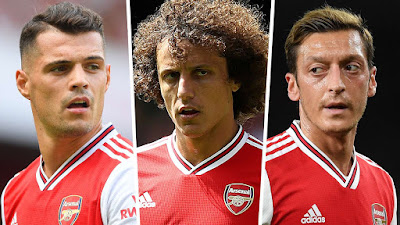 Unai Emery has put the Arsenal captaincy to a vote.
Arsenal’s head coach has yet to officially announce who will replace the now departed Laurent Koscielny as skipper, although Granit Xhaka has worn the armband in every Premier League game so far this season.


Just as he did last year, Emery has stated that he wants to name five captains as part of a leadership group - and had said he would reveal who those players would be last week.
But, speaking prior to the Europa League tie at Eintracht Frankfurt, the Spaniard said he had decided to postpone making an announcement until after the Carabao Cup tie against Nottingham Forest.
The players have yet to be told, however, but Rob Holding has revealed that the squad were recently invited to put forward their preferred choices during a blind ballot at London Colney.
“We had a vote the other week so we’ll see what happens and see who gets named,” said the centre-back, who marked his return following 10 months out with a goal in the 5-0 win against Forest on Tuesday night.
“[We had to] write names down and then give them to the manager. He will go through them obviously with his input and then we’ll see what happens.
“I don’t know [when the decision will be announced]. I think it will be in the next couple of days, or weeks. I have no idea.
“If I get it, then I’ll be more than happy and honoured to do it.”
Holding wore the armband for the final 20 minutes against Nottingham Forest on Tuesday following Mesut Ozil’s substitution.
It was a proud moment for the 24-year-old defender, who headed home Arsenal’s second goal of the evening within seconds of taking over captain’s duties from the Germany international.
And Holding admits he would love the opportunity to skipper the side again.

“I would love to be a captain and being captain of Arsenal is unbelievable,” he said. “It would be a great feeling. We will see what happens in the next couple of weeks. If I get it, I will be more than happy.
“When I was told I was going to be vice-captain [against Forest] it was an honour.
“As soon as Mesut came off I knew I was getting the armband so it was just a great moment for me.”
Several names have been put forward as suggestions for Emery’s five-man leadership group.
Xhaka is a certainty, while Ozil is also expected to be included - despite Emery’s reluctance to use the playmaker on a regular basis.
Holding, Hector Bellerin and Sokratis have been mooted, as has David Luiz - who received some high-profile backing from former Arsenal favourite Paul Merson earlier in the week.
Merson stated that Luiz should get the nod because he is a ‘serial winner’ and Holding admits the former Chelsea man has already made a big impression off the pitch at the Emirates.
“The way David Luiz has come in and when he is talking in front of the group he speaks really well,” said the former Bolton man. “He speaks highly of us so he’s a good addition to bring in.
“But there are a lot of leaders in the team who are helping each other out and pushing each other on. You can see it in training.
“I love Granit in the changing room. I think he is great. He is really switched on to people being late, people using the phones.
“He is quick to dish out the fines. I think he is a great leader and just another positive person to have in the changing room.”
Sports