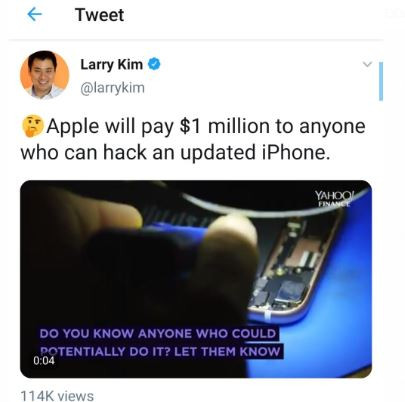 Apple is offering a $1 million reward to anyone who can hack an iPhone as part of the company’s newly-expanded bug bounty program.

The tech giant’s head of security engineering Ivan Krsti? recently shared the news at a conference in Las Vegas.

Previously, the program was invite-only and the highest reward was $200,000. And for the first time, the program will include all Apple platforms, including iOS, iCloud, tvOS, iPadOS, watchOS and macOS.

The full $1 million will go to a hacker who can gain full control of an iPhone without the phone’s owner interacting with it.

Bug bounty programs have become increasingly popular among tech companies, offering hackers financial incentives for reporting security flaws missed by the companies instead of exploiting them. Krsti? said Apple’s bug bounty program has been a success since its inception, with 50 serious bugs reported since 2016.
Tech