Another Nigerian journalist remanded in prison for alleged terrorism, treason 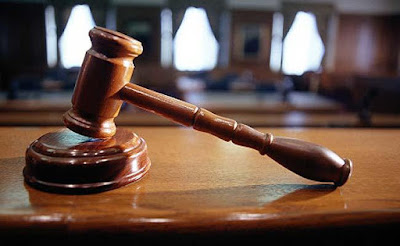 The Federal High Court in Port Harcourt has remanded the publisher of CrossRiverWatch, Agba Jalingo, in prison after he was arraigned on Wednesday.


Mr Jalingo is facing a four-count charge bordering on alleged terrorism and treasonable felony.
He was accused of, among other allegations, staging a protest with the hashtag #RevolutionNow in August with the intention to unseat Governor Ben Ayade of Cross River State.
The court, however, said it would entertain the request for bail on Thursday.
Mr Jalingo was arrested on August 22 in Lagos and taken to Calabar where he has since been in prison.
The police had invited Mr Jalingo for questioning on August 16 after a Microfinance Bank in the state petitioned the security force against Mr Jalingo and his paper, the Cross River Watch, over alleged disturbance of peace and criminal defamation.
Mr Jalingo who had told PREMIUM TIMES that he informed the police he was going to honour the invitation on August 26, also alleged that the Microfinance Bank was fronting for Mr Ayade who Mr Jalingo said the CrossRiverWatch had written critical reports about.
But that claim was denied by Mr Ayade’s spokesperson, Christian Ita, who told PREMIUM TIMES he saw a publication linking Mr Jalingo’s arrest to the August 5 #RevolutionNow protests held across the country by groups and individuals linked to the detained publisher of Sahara Reporters, Omoyele Sowore.
Mr Sowore was himself only granted bail on Tuesday for organising the protest.
Mr Jalingo is the Cross River State Chairman of the African Action Congress, a party under whose platform Mr Sowore contested the 2019 elections in the state.
According to Mr Jalingo’s lawyer who spoke with PREMIUM TIMES in a telephone interview on Wednesday, the court decided to hear the application for bail on Thursday because the prosecution only on Wednesday filed its counter application challenging the bail.
Subsequently, the court presided by Simon Amobede adjourned the case till Thursday after remanding Mr Jalingo in prison..
News