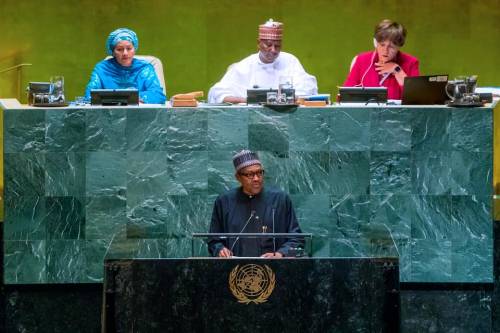 President Muhammadu Buhari has said that Nigeria would not tolerate attempts by persons and organisations he describes as international criminals to defraud the country.


He also stressed that his administration would sustain its anti-corruption fight.
Buhari cited the Nigerian Government’s prosecution of Process and Industrial Development over the controversial $9.6bn judgment it obtained from a London, United Kingdom, court against Nigeria as an example of “a scam”.
He was speaking at the General Debate of the ongoing 74th Session of the United Nations General Assembly in New York, United States.
Buhari told the session that the world was facing various crises, including financial crimes and called for collective efforts by all countries to address the problems, according to a report by PUNCH.
He said, “Organised criminal networks often acting with impunity across international borders present new challenges where only collective actions can deliver genuine results.
“This is true in the battle against violent extremism, against trafficking in people and drugs and against corruption and money laundering.
“The present Nigerian Government is facing the challenges of corruption head-on.
“We are giving notice to international criminal groups by the vigorous prosecution of the P&ID scam attempting to cheat Nigeria of billions of dollars.”
News