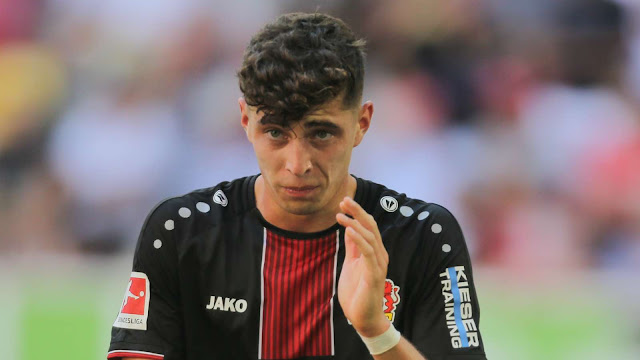 The Bundesliga champions' interest in the 20-year-old has been an open secret, but Leverkusen stood firm on their desire to keep him
Bayer Leverkusen sporting director Rudi Voller has confirmed Bayern Munichenquired about signing Kai Havertz this summer.
The German champions have been heavily linked with the 20-year-old midfielder, with reports in June claiming they had made a €90 million (£82m/$100m) offer for him, while he has reportedly caught the eye of Barcelona, Liverpool and Manchester United among others as well.
After the club dismissed a move as "impossible", Havertz confirmed his desire to stay in July when he insisted he would "definitely" spend the campaign at Leverkusen  and later said he is unsure if Bayern would be the correct destination for him .
And Voller has revealed that he received several calls about the Germanyinternational throughout the summer transfer window, including one from Bayern CEO Karl-Heinz Rummenigge.
"It is no secret that there were a few phone calls and great interest," the 1990 World Cup winner told Sky Deutschland  . "I then spoke directly and completely friendly with Rummenigge. [He] totally understood that we do not [want to sell].
"Bayern were not the only club that asked us about Kai Havertz."
The 59-year-old admitted that he expects the promising star to move on in the near future, though he hopes it is not for another Bundesliga club.
"Let me put it this way: I'm always happy when I see an artist like Kai Havertz playing, preferably with us," he said. "If that's not the case one day, there's always Sky and DAZN.There you can follow all the top European leagues."
Havertz joined Leverkusen at the age of 11 and progressed through the youth system to make his senior debut in September 2016.
He has since made 108 appearances in all competitions for the first team, scoring 30 goals and assisting a further 19.
He has already made three appearances for the national team, while  Germany and Bayern legend Lothar Matthaus has backed him to win the Ballon d’Or in the next few years.
“For me, he was the player of the season [in 2018-19], and if Havertz can maintain this high level, with that lightness, cleverness, presence on the pitch and scoring goals, then he could eventually become my successor as a world footballer of the year," he said  last month.
Sports